With such people in top positions around the world … prepare for the worst.
Thanks to their debt and inflation creating policies they have assured that “The whole society is going to suffer.” (IMF boss Dominique Strauss-Kahn).
They are creating the worst depression ever. 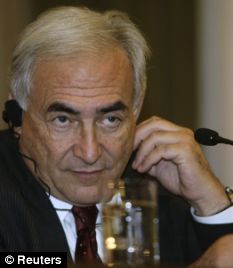 Billions more will have to be pumped into the economy to avoid it spiralling into an even ‘darker’ recession, the head of the International Monetary Fund has warned.

Britain and other leading economies will need to double their economic bailout packages during 2009, which is shaping up to be a ‘really bad year’, according to Dominique Strauss-Kahn.

‘I’m specially concerned by the fact that our forecast, already very dark . . . will be even darker if not enough fiscal stimulus is implemented,’ Mr Strauss-Kahn told BBC Radio 4.

The IMF, which oversees the world’s economic system, is urging governments around the world to splurge a staggering £80trillion in a co-ordinated war against recession.

That would represent around 2 per cent of global annual economic output.

With tax receipts expected to plummet as the recession deepens, the Chancellor would be left with no option but to raise the extra cash through borrowing.

Opening the spending taps in this way would run the risk of blowing an even bigger hole in the public finances, experts warned.

But the IMF believes racking up more debt is the lesser of two evils – and that Britain’s collapse will dwarf those in the U.S., Germany, France, Spain, Russia and Brazil.

The need for more drastic action comes as a key Bank of England policymaker offers a bleak assessment of our economic prospects.

In a exclusive article for the Daily Mail, Tim Besley warns that the UK is facing an ‘ unprecedented set of economic challenges’.

He says interest cuts alone will not be enough to save the economy, because banks are still afraid of lending to each other and customers.