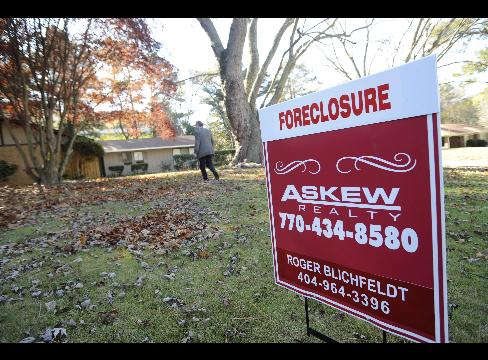 A foreclosure sign is posted in front of a home in Sandy Springs, Georgia, on Nov. 23, 2008. Photographer: Chris Rank/Bloomberg News

Dec. 11 (Bloomberg) — U.S. foreclosure filings climbed 28 percent in November from a year earlier and a brewing “storm” of new defaults and job losses may force 1 million homeowners from their properties next year, RealtyTrac Inc. said.

A total of 259,085 properties got a default notice, were warned of a pending auction or were foreclosed on last month, the seller of default data said in a report today. That’s the fewest since June. Filings fell 7 percent from October as state laws and lender programs designed to delay the foreclosure process allowed delinquent borrowers to stay in their homes.

“We’re going to see a pretty significant storm next year,” Rick Sharga, executive vice president of marketing for Irvine, California-based RealtyTrac, said in an interview. “There are two or three clouds that suggest a pretty heavy downpour.”

Rising unemployment, expiring foreclosure moratoriums and state efforts that “run out of steam” will push monthly filings toward the record of more than 303,000 set in August, Sharga said. The number of homes that revert to lenders, the last stage of foreclosure and known as “real estate owned” or REO properties, will increase to 1 million from as many as 880,000 this year, he said.

“The forces leading to foreclosure are hard to offset in most cases and impossible in many,” Robert Hall, a Stanford University professor and chairman of the National Bureau of Economic Research committee that calls the beginnings and ends of recessions, wrote in an e-mail. “Job loss is a major source of defaults at all times, and job losses are running at extreme levels now.”

Initial jobless claims increased to 573,000 in the week ended Dec. 6, the highest level since November 1982, while the number of workers staying on benefit rolls reached 4.429 million, also the most since 1982, the Labor Department said today. U.S. companies slashed payrolls by 533,000 last month, the fastest pace in 34 years, for a total of 1.9 million job cuts so far this year.

“The labor market is facing its worst crisis since 1982, and it is certainly not over yet,” said Harm Bandholz, a U.S. economist at UniCredit Markets and Investment Banking in New York.

Home prices have fallen by about a fifth from the mid-2006 peak, according to the S&P/Case-Shiller home price index.

“The decline in prices and its devastating consequences” will continue next year with no indication of when they will stabilize, Hall said. Programs that modify the terms of loans, including efforts by Fannie Mae, Freddie Mac, JPMorgan Chase & Co., Bank of America Corp. and Citigroup Inc. can’t help thousands of borrowers, he said.

The share of mortgages delinquent by 30 days or more in the third quarter rose to a seasonally adjusted 6.99 percent while loans already in foreclosure rose to 2.97 percent, both all-time highs, the Mortgage Bankers Association said in a Dec. 5 report. The gain in delinquencies was driven by an increase in loans with payments 90 days or more overdue.

“Until we see a turnaround in the job situation, we’re not going to see these numbers improve,” said Jay Brinkmann, chief economist of the Washington-based bankers group.

In November, one in every 488 U.S. households received a foreclosure filing, RealtyTrac said. Nevada had the highest rate for the 23rd straight month with one in 76 households in some stage of foreclosure, more than six times the national average. Filings more than doubled from a year earlier to 13,962.

California had the most filings with 60,491, up 51 percent from a year earlier, and a rate of one filing for every 218 households, more than twice the national average.

Michigan ranked third in filings with 14,594, up 27 percent, and had a rate of one for every 309 households, according to RealtyTrac. Nevada, Arizona, Ohio, Georgia, Illinois, Texas, and Virginia were among the top 10 states with the most filings.

Florida had three metropolitan areas among the top 10 highest rates, including Cape Coral-Fort Myers in first place with one in 59 households in a stage of foreclosure. Fort Lauderdale was seventh at one in 117 households, and Port Lucie- Fort Pierce was eighth at one in 118 households.

Las Vegas ranked second at one in every 61 households in a stage of foreclosure.

California had six metro areas in the top 10, led by Merced in third place with a rate of one in 76 households in a stage of foreclosure. Modesto, Stockton and Riverside-San Bernardino ranked fourth through sixth, Bakersfield was ninth and Vallejo- Fairfield was 10th, according to RealtyTrac.

1 thought on “Foreclosure Storm Will Hit U.S. in ‘09 Amid Job Loss”