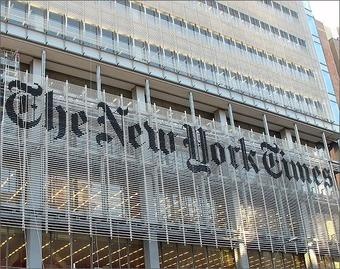 The New York Times Company plans to borrow up to $225 million against its mid-Manhattan headquarters building, to ease a potential cash flow squeeze as the company grapples with tighter credit and shrinking profits.

The company has retained Cushman & Wakefield, the real estate firm, to act as its agent to secure financing, either in the form of a mortgage or a sale-leaseback arrangement, said James M. Follo, the Times Company’s chief financial officer.

The Times Company owns 58 percent of the 52-story, 1.5 million-square-foot tower on Eighth Avenue, which was designed by the architect Renzo Piano, and completed last year. The developer Forest City Ratner owns the rest of the building. The Times Company’s portion of the building is not currently mortgaged, and some investors have complained that the company has too much of its capital tied up in that real estate.

The company has two revolving lines of credit, each with a ceiling of $400 million, roughly the amount outstanding on the two combined. One of those lines is set to expire in May, and finding a replacement would be difficult given the economic climate and the company’s worsening finances. Analysts have said for months that selling or borrowing against assets would be the company’s best option for averting a cash flow problem next year.

Standard & Poor’s recently lowered its credit rating on the Times Company below investment grade, and Moody’s Investors Service has said it was considering a similar move. Times Company stock, which has lost more than half its value this year, closed on Friday at $7.64, down 30 cents.