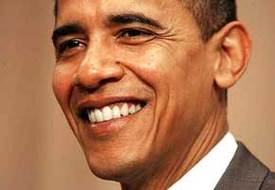 WASHINGTON: Sovereign nations have the right to protect themselves, US president-elect Barack Obama said on Monday, when asked if India could follow the same policy he advocated during his election campaign – of bombing terrorist camps in Pakistan if there was actionable evidence and Islamabad refused to act on it.

Although Obama said he did not want to comment on the specific situation involving India and Pakistan, his tacit endorsement of New Delhi adopting the same policy was circumscribed by two caveats: first, let the investigators reach definite conclusions about the Mumbai carnage, and second, see if Pakistan will follow through with its commitment to cooperate in eliminating terrorism.

”My administration will remain steadfast in support of India’s effort to catch perpetrators and bring them to justice. I expect the world community will feel the same way,” Obama said, in one of several references to the events in Mumbai that underscored the roll-out of his national security team in Chicago on Monday. ( Watch )

As expected, Obama named Hillary Clinton as Secretary of State, and retired marine General James Jones as National Security Advisor, in addition to retaining Robert Gates as Defense Secretary, among the three principals of his administration.

The second tier of the national security team he introduced included Eric Holder as Attorney-General, Janet Napolitano as Secretary of Homeland Security, and Susan Rice as the U.S ambassador to United Nations.

In fact, Obama disclosed that the Mumbai massacre topped the agenda of the new national security team at its first meeting Monday morning ahead of the public roll-out. ”This morning, we met to discuss the situation in Mumbai and some of the challenges that we face in the months and years ahead,” he revealed, indicating that the South Asia crisis would be among the first issues to occupy his administration as it takes office.

The president-elect referred repeatedly to the tragedy at his press conference and said he had spoken to Prime Minister Manmohan Singh to tell him that the United States is with India in this dark hour. ”In the world we seek, there is no place for those who kill innocent civilians to advance hateful extremism. And I am confident that India’s great democracy is more resilient than killers who would tear it down,” he said.

Obama reiterated his stand that there was only one president at a time in the U.S as he trod a delicate line in setting any new policy. But he appreciated the actions taken by the Bush administration and keeping him informed about it. ”What I can say unequivocally is that both myself and my team are absolutely committed to eliminating terrorism,” he said. ”We cannot tolerate attacks based on twisted ideology of hate…we will bring the full force of our military, economic and diplomatic power to defeat this. I will be monitoring the situation closely.”

Source: The Times of India