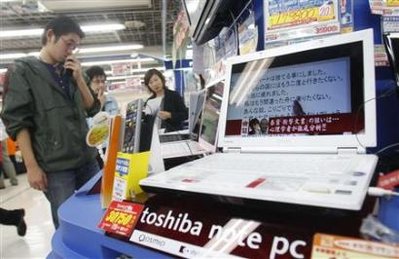 Weak demand for chips also acted as a drag on Fujitsu Ltd, (6702.T) as well as weakness in its PC sales and hard drives, cancelling out cost cuts in its servers and IT services, and it slashed its annual outlook to below the market consensus.

Toshiba, the world’s No.2 maker of NAND flash memory, said it has yet to make a decision about possible cuts to its plan to spend 367 billion yen ($3.70 billion) on new lines and equipment for its chip business.

Toshiba is still banking on breaking even on its chip business in the October-March second half, based on its assumption that NAND price falls will slow to a 10 percent fall in October-December, and another 5 percent fall in January-March. Prices fell 45 percent in the six months to September 30, it said.

“We are braced against a negative spiral” as the financial crisis affects demand in the real economy, Toshiba Corporate Executive Vice President Fumio Muraoka told reporters at a news conference. “We want to watch the holiday season sales before making any changes to our capital spending plans or to our outlook.”

A slowdown in the global economy is muting demand for NAND flash memory chips, used in music players such as Apple’s iPod and digital cameras, and Toshiba is widely expected to slow aggressive plans to ramp up capacity and catch up with Samsung.

Cash has suddenly become all-important and rating downgrades raise concerns about higher financing costs for itself and its partners.

Toshiba, which also makes nuclear reactors, PCs, mobile phones and LCD TVs, expects to post an operating profit of 150 billion yen ($1.5 billion) in the year to March, down 37 percent.

That is still above the consensus estimate of 117 billion yen by 12 analysts who lowered their estimates after the firm revised down its forecast in September.

Toshiba, whose shares have shed about 59 percent since the start of the year, reported an operating profit of 707 million yen ($7.1 million) in July-September, down from a 61.3 billion yen profit a year earlier on a 7.3 percent fall in sales to 1.88 trillion yen.

It posted a net loss 26.9 billion yen, down from a profit of 25.0 billion yen the previous year.

Fujitsu, which competes with International Business Machines Corp (IBM.N) and Electronic Data Systems Corp, said it now expects to earn an operating profit of 150 billion yen in the year to March, down 27 percent from the previous year and down 32 percent from its previous outlook.

In July-September, Fujitsu, which seeks to rein in losses on its hardware and raise profitability on its IT services, posted an operating profit of 32.7 billion yen, down 20 percent from the same period a year earlier.

Prior to the results announcement shares in Toshiba, which also competes with domestic peers Hitachi Ltd (6501.T) and Mitsubishi Heavy Industries Ltd (7011.T) in nuclear energy, closed up 11 percent, against a rise of 7.7 percent in the benchmark Nikkei average (.N225). Fujitsu fell 7.7 percent to 370 yen.