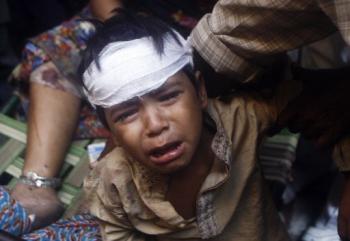 The blasts on Saturday evening struck five crowded areas of New Delhi within 45 minutes, and were claimed by a group calling itself the Indian Mujahideen.

One had been placed at India Gate, one of the country’s most iconic monuments and a major tourist attraction in the heart of Delhi.

“We have very vital clues, positive clues, we are very hopeful we will solve this case,” he said, confirming the latest toll at 20 dead and 98 injured.

The bombs were of varying intensity and the targeted locations in middle-class south and central Delhi were all packed with evening shoppers.

“We have discussed various measures that may be needed not only in Delhi but other major cities,” he said, promising to “fill up any kind of (security) gap, strengthening the machinery, the system and processes.”

A fifth ripped through a busy electronics and automobile components market.

A bomb disposal expert said the devices appeared to have been packed with steel ball bearings and nuts and bolts “to cause maximum harm.”

“Everything turned black in front of me,” said one witness, Gulab Singh, who was in Connaught Place when one of the bombs exploded.

“I saw at least one woman almost flying in the sky, hurled by the deafening blast which we heard. There was a stampede by panic-stricken people. Many fell down and some were trampled on.”

India went on high alert after the blasts, boosting security at airports, rail stations and city centres. The Delhi metro was also shut.

In an email sent to several media outlets minutes before the first blast, the Indian Mujahideen challenged authorities to “stop us if you can.”

Little is known about the militant group, which had also claimed responsibility for bombings in July that killed at least 45 people in the cities of Ahmedabad and Bangalore.

Security services suspect it may be a front for groups banned by the Indian government over the past few years such as the Students’ Islamic Movement of India.

Others say it could be a loose coalition of the Pakistan-based Lashkar-e-Taiba and Jaish-e-Mohammed militant groups.

A Lashkar-e-Taiba spokesman denied to AFP on Sunday any link to the Indian Mujahideen.

The email threat was traced to a Mumbai electronics firm, which police believe had its wireless connection hacked in to.

“We are innocent and hard-working people,” Sarika Kamath, wife of the company’s owner, told the Press Trust of India.

“We did not feel the need to secure or password protect our Internet connection. But now it has become a necessity.”

A similar email sent before the Ahmedabad bombings was also sent via a hacked wireless connection in the Mumbai suburbs.

The head of Mumbai’s anti-terrorism squad, Hemant Karkare, told AFP the city was also on high alert as huge crowds gathered for the final day of an annual Hindu festival.

But he refused to confirm or deny reports that the email message said Mumbai would be the next target.

“Mumbai is always a target because it’s a commercial capital,” he said.