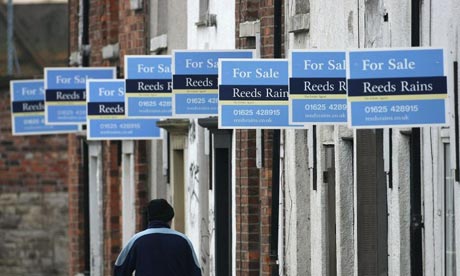 Estate agents are recording the lowest level of sales since 1978. Photo: Getty

Estate agents are selling an average of just one home a week as the number of sales hits a 30-year low, according to a report today.

The latest monthly snapshot of the housing market by the Royal Institution of Chartered Surveyors (Rics) said it had stalled in August as a result of a continued lack of finance for mortgages and uncertainty over stamp duty.

Rics said its members had reported the lowest number of home sales since records began in 1978.

Asked about the market in their area, 81% more surveyors said they had seen a fall rather than a rise in house prices. The majority said new enquiries from buyers were also down.

Three-month figures showed surveyors averaging 12.7 sales each, while Rics said that in some areas they were reporting fewer than one sale a week.

The number of properties put on the market in August also fell for the eight month running, the survey said, although the pace of decline showed signs of slowing.

The slowdown is a hopeful sign, as it suggests homeowners are not being forced to sell.
Market uncertainty

Surveyors said August property sales, traditionally slow with many would-be buyers on holiday, had ground to a halt following speculation that stamp duty might be suspended.

Last week, the government finally confirmed the change, raising the stamp duty threshold from £125,000 to £175,000 for 12 months, meaning that almost half of purchases are now free from the tax.

The move, which lifted half of property sales out of paying stamp duty, was part of a package to encourage first-time buyers back into the market.

However, Rics spokesman Jeremy Leaf said more help was needed to revive the market, and urged the government to step in to help mortgage lenders.

“While money is scarce, many will continue to be denied the next step on the property ladder,” he said.

“The government’s stamp duty policy will not be enough to kick-start transactions and is more likely to assist buy-to-let investors with better access to finance than the first-time buyers it was aimed at. More needs to be done to reinvigorate a market whose confidence has taken a severe knock.”

The Rics survey adds to the growing picture of gloom in the housing market.

Nationwide and Halifax both reported double-digit falls in house prices in August – the fastest rate of decline since 1990 – and yesterday the chief executive of Nationwide said he expected prices to fall by 25% from their peak last autumn before the market recovers.

Figures published by the Council of Mortgage Lenders this morning showed the number of first-time buyers entering the market had fallen to a new low in July, with just 17,300 new buyers receiving mortgage approvals, compared with 33,100 in the same month last year.