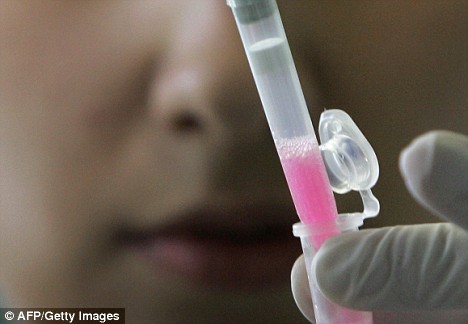 More than 400,000 of those were added in the past two years, further fuelling the belief that the Government is building a genetic record of the entire population by stealth.

The figure of 573,639 people on the database who have not been convicted, cautioned, formally warned or reprimanded has pushed the overall total to 4.2million.

In the past two years alone, a total of about one million new people have had their DNA added. Nearly half of them – 434,176 – have not been convicted of any crime.

Police can take DNA fingerprints from anybody arrested on suspicion of a recordable offence.

But DNA taken from victims and witnesses to separate it from suspects’ samples at crime scenes can also be added to the database.

The information can be stored indefinitely and potentially matched with samples at crime scenes, even if the suspect is innocent.

Civil rights campaigners and MPs have been calling on the Government to change the law to force the police to destroy the DNA records of anyone without a criminal record.

Last month, a Government-funded inquiry called for new laws to limit who can access the database, including restricting police use to ‘seeking matches from a crime scene’.

It also called on Ministers to curtail police powers that allow them to take DNA by force from people picked up for minor offences such as a breach of the peace.

The revelations of the number of ‘non-criminals’ being added to the system are contained in internal research statistics obtained by The Mail on Sunday from the National Policing Improvement Agency, which oversees the DNA database.

The research, carried out at the end of March, compared individuals on the DNA database and records on the Police National Computer.

It is the first official figure on the number of ‘innocents’ on the database since November 2005, when there were just 139,463 people on the system who had not been charged or cautioned.

Home Office Minister Meg Hillier said the profiles of an estimated 39,095 ten to 17-year-olds who ‘had not been convicted, cautioned, received a final warning/reprimand and had no charge pending against them’ were on the database.

Before 2001, the police could take DNA samples during investigations but had to destroy these and the records derived from them if the people concerned were acquitted or charges were not proceeded with.

The law was changed in 2001 to remove this requirement and changed again in 2004 so that DNA samples could be taken from anyone arrested for a recordable offence and detained in a police station.

Neither the Home Office nor the National Policing Improvement Agency would explain the reason for the apparent huge increase in the number of people not convicted of any offence being added to the system.

Last night a spokesman for the National Policing Improvement Agency said the new figures were incomplete and had been produced only for research purposes.

He said: ‘It is not possible to give a precise figure for the number of people on the National DNA Database who have committed no offence as some relevant conviction and caution records have been weeded from the Police National Computer.’

He added that he was unable to discuss the apparent increase because it was not ‘a like-for-like comparison’.

And a Home Office spokeswoman said: ‘The National DNA Database is a key intelligence tool which has revolutionised the way the police can protect the public through identifying offenders and securing more convictions.

‘It provides critical investigative leads for police investigations, providing on average about 45,000 matches per year.’

The spokeswoman pointed to the case of Abdul Azad, who was arrested for violent disorder in his Birmingham home in February 2005.

He had a DNA sample taken and was released without charge.

Later that year a rape happened in Stafford, 25 miles away. There were no clues until skin from beneath the victim’s fingernails was profiled and found to match the DNA taken from Azad. He was jailed for six years.By Jason Lewis