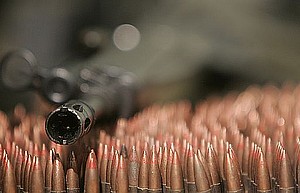 The U.S. embassy in Kyrgyzstan has found itself embroiled in scandal after the country’s interior ministry announced that a hoard of U.S.-made weapons has been found in a house in Bishkek rented by U.S. citizens. The embassy hurriedly stated that the weapons were intended for antiterrorism exercises, but Kyrgyz enforcement agencies have not confirmed that. The news is the talk of Kyrgyzstan. The prosecutor general has begun an investigation.

Local police found 53 firearms, including large-caliber guns, grenade launchers, machineguns, pistols, sniper’s rifles and more than 15,000 rounds of ammunition of various sizes. According to Kyrgyz Deputy Minister of the Interior Temirkan Subanov, there were two employees of the U.S. embassy with diplomatic immunity and ten members of the American military, allegedly in the country to train Kyrgyz special forces. “Interior Ministry staff questioned them about the weapons and ammunition to determine their purpose. We received information from residents of a new house that they were constantly moving things into and out of that house. None of the U.S. citizens were detained or arrested. All of them were simply questioned,” Subanov said.

The U.S. embassy quickly issued a statement saying that the cache was in the country with the permission and at the request of Kyrgyz authorities. The Kyrgyz Defense Ministry, State Committee for National Security, border service and national guard say that they have no training with Americans planned. Only the narcotics control agency had such plans, but they did not include weapons. Kyrgyz officials are not commenting on the situation. Observers are both pointing out reasons to be alarmed at the incident and reasoning that the United States has little motivation to create a provocation in Kyrgyzstan.