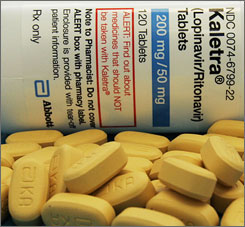 Drug companies are quietly pushing through price hikes of 100% – or even more than 1,000% – for a very small but growing number of prescription drugs, helping to drive up costs for insurers, patients and government programs.

The number of brand-name drugs with increases of 100% or more could double this year from four years ago, researchers from the University of Minnesota say. Many of the drugs are older products that treat fairly rare, but often serious or even life-threatening, conditions.

Among the examples: Questcor Pharmaceuticals last August raised the wholesale price on Acthar, which treats spasms in babies, from about $1,650 a vial to more than $23,000. Ovation raised the cost of Cosmegen, which treats a type of tumor, from $16.79 to $593.75 in January 2006.

The average wholesale price of 26 brand-name drugs jumped 100% or more in a single cost adjustment last year, up from 15 in 2004, the university study found. In the first half of this year, 17 drugs made the list.

“This does drive up the price of health care,” says Alan Goldbloom, president of Children’s Hospitals and Clinics of Minnesota. “Hospitals are either eating the cost or passing it along to insurers, so you and I are paying it in increased premiums.”

Some of the drugs are administered in hospitals, which bill insurers, patients or government programs for them. Insured patients pay either a flat dollar amount, such as $20, or a percentage of the drug’s cost.

Last year, prices rose about 7.4% on average for 1,344 brand-name drugs, according to Express Scripts, which manages drug benefits for large employers and insurers.

Reasons for the larger increases are varied, researchers say.

“There’s no simple explanation,” says Stephen Schondelmeyer, director of the PRIME Institute at the University of Minnesota, which studies drug industry economics. “Some companies seem to figure no one is watching so they can get away with it.”

The price increases are drawing legal and political scrutiny:

•In a decision awaiting approval by the 9th U.S. Circuit Court of Appeals, drugmaker Abbott agreed last week to pay up to $27.5 million to settle a lawsuit over a 400% price increase on its HIV/AIDS drug Norvir. Settlement did not lower the price.

Drug companies say the price hikes cover the costs of keeping the drugs on the market. They say the drugs are often less costly than alternative treatments, such as surgery or newer, high-tech medicines.

Questcor says on its website that it had to raise Acthar’s price after struggling for years to “keep (it) financially viable.”

Ovation says it needed to cover its 2005 purchase of the drugs and facility upgrades. “We feel we made an important investment in keeping these older products alive,” says spokeswoman Sally Benjamin Young.

Researchers found a growing number of drugs with one-time price increases of 100% or more. Some examples based on average wholesale prices:

Source: Joint Economic Committee from data analyzed by the PRIME Institute at the University of Minnesota