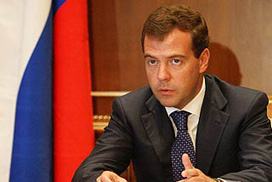 At a meeting with the permanent members of the Russian Security Council, the President declared:

“Russia has maintained and continues to maintain a presence on Georgian territory on an absolutely lawful basis, carrying out its peacekeeping mission in accordance with the agreements concluded. We have always considered maintaining the peace to be our paramount task. Russia has historically been a guarantor for the security of the peoples of the Caucasus, and this remains true today.

Last night, Georgian troops committed what amounts to an act of aggression against Russian peacekeepers and the civilian population in South Ossetia. What took place is a gross violation of international law and of the mandates that the international community gave Russia as a partner in the peace process.

Georgia’s acts have caused loss of life, including among Russian peacekeepers. The situation reached the point where Georgian peacekeepers opened fire on the Russian peacekeepers with whom they are supposed to work together to carry out their mission of maintaining peace in this region. Civilians, women, children and old people, are dying today in South Ossetia, and the majority of them are citizens of the Russian Federation.

In accordance with the Constitution and the federal laws, as President of the Russian Federation it is my duty to protect the lives and dignity of Russian citizens wherever they may be.

It is these circumstances that dictate the steps we will take now. We will not allow the deaths of our fellow citizens to go unpunished. The perpetrators will receive the punishment they deserve.”