As soldiers prepare to be deployed on Italian streets, a city mayor has been accused of Fascism after he passed an edict banning groups of more than three people congregating in parks and public gardens. 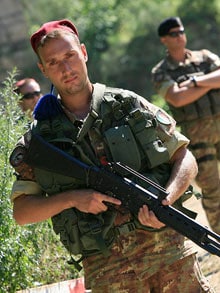 Critics have complained that the sight of gun-toting soldiers on Italian streets will have a negative effect Photo: AFP/GETTY

The anti-gathering laws were enacted as thousands of soldiers were due to take to the streets of Italian cities for the first time on Monday under a controversial move by Prime Minister Silvio Berlusconi to fight crime.

Massimo Giordano, a member of Italy’s anti immigration Northern League party, defended the anti-gathering motion and claimed it would cut down on unruly behaviour.

However opposition councillors said it was “reminiscent of Benito Mussolini’s edict of the 1920’s which banned groups of five or more people”.

The ban will not affect courting couples who flock to parks and gardens in the northern Italian city of Novara, where Mr Giordano holds power, but if anyone is caught in a group of three or more they face a fine of 500 euro (£350).

Mr Giordano said that the edict would ban “gatherings in a bid to protect public decorum and prevent damage to public parks and gardens” from people who gathered in them at night.

Novara, which has a population of 100,000, is not seen as a particularly crime-ridden or violent city but the mayor passed the law after several elderly residents complained of noise.

He has also banned the consumption of alcohol at the city’s station after 6pm and closed a immigrant cultural centre.

Opposition councillor Sara Paladini said: “There is no emergency situation in Novara – there is no need for such a Fascist edict. There are other better ways to tackle the city’s problems.”

But Mauro Franzinelli, the councillor in charge of security, said: “This is needed to limit public disturbance. The citizens of Novara asked for it. I understand opposition left councillors plan to gather and protest in groups of more than three – we will not fine them this time.

“One thing I will say though is that to compare the ordinance with Fascism is absurd. We are trying to solve issues but are being accused of Fascism.”

Around 3,000 troops are expected to begin patrolling streets of major cities – including Rome, Milan, Naples, Bari, Palermo and Venice – on Monday as part of a government clampdown on crime.

The capital has been earmarked for the highest number of troops – 1,000 will patrol high-profile locations such as stations, embassies and diplomatic residences.

Critics have complained that the sight of gun-toting soldiers on Italian streets will have a negative effect, especially on tourism and there have been contradictory messages from city and military leaders on the troops’ role.

Gianni Alemanno, Rome’s mayor, has said that they will not be deployed around the city’s tourist sites. But Ignazio La Russo, the country’s defence minister, has said they will.

Giorgio Sansa, a tour guide who runs a travel firm in Rome, said: “I really don’t see the need for troops on streets, it will have a completely negative effect.

“I have already had people calling me after reading reports of troops on streets in Italy and asking me is there some sort of civil war going on.”

Soldiers will also patrol alongside regular police officers, but they will have no powers of arrest and can merely stop, search and identify anyone who arouses suspicion. They will carry small arms, but not machine guns.

Centre-Left opposition MP’s have criticised the plan because they fear it will scare off tourists and actually do little to deter crime.

Marco Minniti, the shadow interior minister of the Democratic Party, said: “It’s an image-boosting operation that risks turning into a boomerang.

“It will make Italy look like a country in the grip of an uncontrolled security emergency.

“Paratroopers guarding the centres of the major tourist cities aren’t exactly a great calling card for a country at the height of the tourist season.”

Antonio Di Pietro, of the Italy of Values party, said: “We will have one soldier for every 10 municipalities, doing nothing except going to the bar with a policeman. It’s a joke. And to cap it all it’s only a provisional measure.”

The soldiers will initially be deployed for just six months with a provision to extend for a further six months.

The last time Italy put soldiers on the streets was to fight a crime wave in Naples in 1997, while they were also deployed in Sicily after a Mafia bomb campaign in 1993-4.

Troops have not been seen in Rome since the “years of lead” in the mid 1970s when the Red Brigades carried out a series of spectacular kidnappings, including the murder of Christian Democrat leader Aldo Moro.