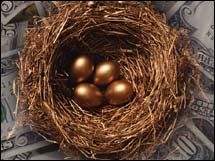 NEW YORK (CNNMoney.com) — Falling stock markets around the globe and the credit crunch are putting the pension funds of some of the largest U.S. companies into deeper financial holes, according to a report released Monday.

Since the credit crunch hit last fall, pension plans funded by S&P 1500 companies have lost about $280 billion in assets, according to an actuary at Mercer, a human resources consulting firm.

On paper, the losses from last October tally $160 billion. However, according to Mercer actuary Adrian Hartshorn, the asset losses are closer to $280 billion when pension plan assets and liabilities are considered together. The losses amount to about 7% of a total $4 trillion in pension plan assets.

Companies should be concerned, he said, because – assuming no change in the market – a typical U.S. company can expect their pension expenses to increase between 20% and 30% in 2009. That’s due to the higher cost of servicing the pension plan’s debt and the smaller return from the plan’s assets.

“I think it’s important for corporations to be aware of what’s going on in their pension plans, as corporations would be concerned when any part of its business is performing badly,” Hartshorn said.

According to the report, the total losses on pension assets and liabilities from the last day of 2007 through the end of June has grown to more than $80 billion.

Part of the loss has been reflected in companies’ current financial statements, but many losses incurred since the end of 2007 have yet to hit company balance sheets.

The affected pension plans are qualified and non-qualified plans.