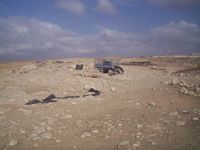 GAZA CITY, Jul 2 (IPS) – Gaza is being forced to pump 77 tonnes of untreated or partially treated sewage out to sea daily due to the Israeli blockade of the coastal territory. The fear is that some of this is creeping back into drinking water.

“The health of Gaza’s 1.5 million people is at risk,” Mahmoud Daher, from the UN World Health Organisation (WHO) told IPS following a report released by WHO after it carried out a number of tests on Gaza’s contaminated water.

On the ground Israel’s closure has translated into a lack of fuel, electricity and spare parts needed to operate wastewater and sewerage treatment plants. Consequently Gaza’s water and sanitation systems are near complete collapse as the power required to run treatment and desalination plants, pump water to homes, and pump sewage away from populated areas is only available on a very limited basis.

Following Hamas’ takeover in Gaza last year, after it won legislative elections in 2006, Israel designated the densely populated strip of 360 square kilometres hostile territory and sealed off the borders, enforcing an embargo which is supported by the international community.

Since then the Jewish state has allowed only a trickle of humanitarian goods into Gaza, and only after intense international pressure and intervention. Besides drastically reducing fuel and electricity supplies, Israel has also barred import of most vital technical parts, which humanitarian organisations argue are necessary if Gaza’s basic infrastructure is to operate.

In order to assess the degree of sewage contamination WHO took seawater samples from 13 risky areas in the five governorates of the Gaza Strip. Two microbiological tests were carried out to examine the presence of human and animal faeces.

The danger is that this contaminated sea water is leaking into Gaza’s underground water aqueduct following a two-year drought. The drought has meant that the 160 million cubic metres of water extracted every year from Gaza’s underground water supply is not being replenished as the strip received only an annual average of 85 million cubic metres of rain over the last couple of years.

“The deficit is being replaced by sewage-polluted seawater which is leaking back into the aqueduct, and we are forced to dig further and further into the ground to try and replenish supplies,” Monther Shoblak, general manager of Gaza’s Coastal Municipalities Water Utility (CMWU), the body responsible for water and sanitation, told IPS.

“We are extremely concerned about a possible outbreak of water-borne diseases such as typhoid, cholera, dysentery, and gastro-enteritis,” added Daher.

Following WHO’s water analysis results, the Palestinian Water Authority last month told Gazans to boil all water before cooking or drinking, following a shortage of hypochlorite, the chemical used to clean water, due to the blockade.

WHO also warned that nitrates in Gaza’s drinking water coming from leaking sewage and agricultural chemicals in the groundwater are 13 times higher than international safety standard levels.

Doctors in Gaza have indicated that the high levels of nitrates are partly responsible for the rising number of Palestinians suffering from anaemia, although poverty and malnutrition, exacerbated by the economic embargo and the resulting decimation of the territory’s economy are also to blame.

Further aggravating the situation are the power and fuel shortages, and the limited number of fuel pumps and water filters. This has meant that Gaza’s 135 drinking water wells, three treatment plants and four storm-water pumping stations, which all run on petrol and electricity, are almost at a standstill.

Only 20 of the water wells are connected to electricity and due to electricity cuts they are forced to operate by means of emergency generators, but there is not always sufficient fuel to keep the generators operating.

Financial and technical help from the international community is available. But three planned and internationally financed wastewater treatment plants have been put on hold due to the blockade, Mike Bailey, Oxfam’s Jerusalem-based advocacy and media manager told IPS.

Oxfam is a partner of CMWU and is involved in financing and building a number of water and sewage related projects all over the Palestinian territories.

“The World Bank is behind the financing of one treatment plant in Beit Lahiya in northern Gaza, the German Development Bank is backing one in the middle of the Gaza Strip and the Japanese government is bankrolling one in Khan Yunis in the south,” said Bailey.

But despite the funds being available, due to the closure they have all been forced to suspend operations as no contractors will take the work on as they know they will not be able to import the necessary building materials, and the Israelis will not allow them entry into the territory, said Bailey.

However, one wastewater treatment plant in Beit Lahiya, also financed by the World Bank, managed to be completed but a year late, and only after direct intervention by former British prime minister Tony Blair, now envoy of the Middle East Quartet (the U.S., the EU, Russia and the UN).

The shaky and tentative ceasefire was meant to ease the situation somewhat with Israel slowly easing the closure but Israel resealed the borders after a number of rockets were fired at Israel, which in turn followed the assassination of several Islamic resistance fighters in the West Bank.

The UN also accused the Israeli Defence Forces of seven ceasefire violations. These include the shooting of two Gazan civilians tending their crops, who the Israelis claim had come too close to the border fence. (END/2008)