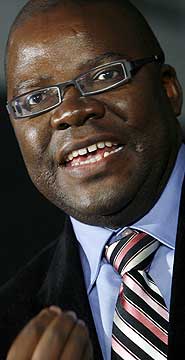 Tendai Biti faces the death penalty over the allegations of treason

The crackdown on the Opposition in Zimbabwe intensified yesterday with the arrest of its deputy leader on the charge of treason, as he arrived back in the country from a week-long trip to South Africa.

Tendai Biti, the secretary-general of the Movement for Democratic Change (MDC), was met at Harare airport by five plainclothes officers who handcuffed him and led him to an unknown police station.

The police said that Mr Biti was to be charged with publishing a “treasonous document” outlining MDC plans to return all land seized from white farmers and to dismiss all members of the military and police service if it won the presidential election at the end of this month. If found guilty, he could be sentenced to death.

The MDC dismissed the letter as a fake manufactured by the Zimbabwe intelligence services, recalling the purported letter between the MDC leader Morgan Tsvangirai and Gordon Brown that the British Embassy denounced as a “crude hoax” last month.

Mr Biti is also charged with “communicating statements prejudicial to the State” for announcing Mr Tsvangirai’s win in the March 29 election with 50.3 per cent of the vote. The vote, reduced to 48 per cent in the official results, would have given him an outright victory in the presidential contest against Robert Mugabe.

Independent election observers said that the final results were not credible, but African observers signed off on the vote. At the time the Government said Mr Biti had illegally announced the results.

Mr Biti’s arrest came hours before Mr Tsvangirai was detained for a third time in a week as he attempted to campaign for the presidential election run-off against Mr Mugabe, due two weeks from today. Police in Kwekwe stopped Mr Tsvangirai’s American-style campaign bus at a roadblock and took his entourage to a local police station. His team presented the bus, emblazoned with the slogan “Morgan is the one”, only a day earlier as a new tactic in the fight to remain visible on the campaign trail.

He was released a few hours later without charge, only to be arrested again by another group of policemen. “Our vehicles were searched. It’s just harassment, but we will be continuing with our campaign tomorrow,” George Sibotshiwe, an MDC spokesman, said after Mr Tsvangirai was released last night for the second time.

Mr Tsvangirai has been prevented from holding a single rally since returning to Harare from self-imposed exile nearly three weeks ago, despite a court order affirming his right to do so. He has drawn ecstatic crowds at impromptu meetings at village shops, bus stops, wells and roadsides.

His detentions came amid a wave of new arrests and raids and yet another killing of an opposition supporter, bringing the MDC death toll to 67. “It’s incomprehensible,” said a Western diplomat. “They are going all out to destroy the MDC and anyone else around them so they can’t fight the election. Why do they bother to hold an election at all?”

The MDC said that on Tuesday unknown men shot dead the brother of one of its councillors in the Musana district, about 60km (35 miles) east of Harare, apparently confusing him with the councillor. In Karoi, 200km north of Harare, the home of Blessing Chebundo, the MDC MP and national executive member, was burnt down on Wednesday morning. “Several of my relatives were injured,” he said. “My eight-year-old son is missing. I reported him to the police, but I don’t expect they will do anything.”

In the past few days, police have raided the offices of civil society and pro-democracy groups, many of which receive funding from the United States and Britain. One was a voluntary medical organisation cataloguing and treating the flood of injuries inflicted by ruling party militias since the March election. It has since been forced to turn victims away.

The US Embassy confirmed yesterday that a convoy carrying American food aid for school children had been hijacked by state security forces and “war veterans” and distributed to supporters of the ruling Zanu (PF) Party at an election rally.

Paul Engelstad, an embassy spokesman, said that the load of grain, beans and cooking oil was being carried by a lorry belonging to Catholic Relief Services when it was stopped in the eastern province of Manicaland by an army colonel who ordered the driver to take it to a nearby police station. “The governor instructed the war veterans to distribute the food to Zanu PF,” Mr Engelstad said. “We are very concerned about the lawlessness.”