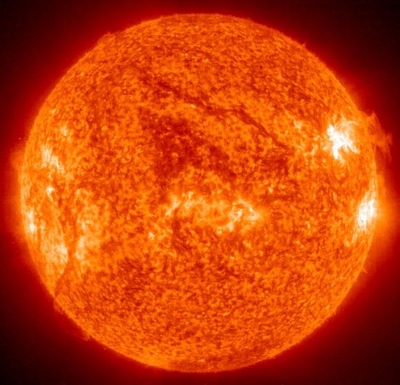 The Army is weighing in on the global warming debate, claiming that climate change is not man-made. Instead, Dr. Bruce West, with the Army Research Office, argues that “changes in the earth’s average surface temperature are directly linked to … the short-term statistical fluctuations in the Sun’s irradiance and the longer-term solar cycles.”

In an advisory to bloggers entitled “Global Warming: Fact of Fiction [sic],” an Army public affairs official promoted a conference call with West about “the causes of global warming, and how it may not be caused by the common indicates [sic] some scientists and the media are indicating.”

In the March, 2008 issue of Physics Today, West, the chief scientist of the Army Research Office’s mathematical and information science directorate, wrote that “the Sun’s turbulent dynamics” are linked with the Earth’s complex ecosystem. These connections are what is heating up the planet. “The Sun could account for as much as 69 percent of the increase in Earth’s average temperature,” West noted.

It’s a position that puts West at odds with nearly every major scientific organization on the planet. “The American Meteorological Society, the American Geophysical Union, and the American Association for the Advancement of Science all have issued statements in recent years concluding that the evidence for human modification of climate is compelling,” Science magazine observes. So has the United Nations’ Intergovernmental Panel on Climate Change (IPCC), which shared the 2007 Nobel Peace Prize with Al Gore, for their work on global warming.

In recent days, the science and politics of climate change have once again taken center stage. NASA’s Inspector General just issued a report, acknowledging that political appointees “reduced, marginalized or mischaracterized climate change science made available to the general public.” Yesterday, the Senate began debating a bill that would cap carbon dioxide emissions — considered one of the leading causes of man-made global warming.

UPDATE: “The Army does not have a position on global warming. Dr. West is an Army chief scientist, and is presenting one alternative theory to the cause of global warming,” Army spokesperson Lindy Dinklage tells Danger Room. “This research is just some amongst thousands of studies being conducted by Army Scientists across the globe.”

Okay. But the Army’s Office of the Chief of Public Affairs chose to promote just this one study. And when Army public affairs rolls out research from an Army chief scientist — with no clarifications that these are just his private views — I think it’s fair to call that an official endorsement.

After the jump: the Army’s full press release.

Is global warming really caused by humans, or is it simply the result of different aspects of the sun’s dynamics?

Dr. Bruce West, Chief Scientist, Mathematical & Information Science Directorate, Army Research Office, will discuss the causes of global warming, and how it may not be caused by the common indicates some scientists and the media are indicating. Research conducted by Dr. West contends that the changes in the earth’s average surface temperature are directly linked to two distinctly different aspects of the sun’s dynamics: the short-term statistical fluctuations in the Sun’s irradiance and the longer-term solar cycles.

Please reply to this message if you are interested in participating.

Office of the Chief of Public Affairs

Department of the Army