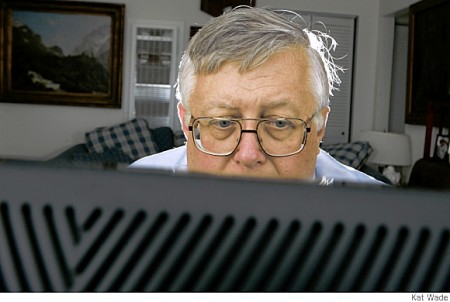 Oakland economist John Williams doesn’t seem like the kind of guy to pick fights with the government.

He’s slow moving and soft spoken, conservative in politics and personal habits, a pale and portly 59-year-old who favors Oxford shirts, Rep ties and sensible shoes. Williams is the sort who pays his taxes on time, waits when the signal says “Don’t Walk” and snaps to attention when the national anthem is played.

But don’t be fooled. The New Jersey native is leading a one-man crusade to expose official economic data as grossly misleading at best and, at worst, a pack of lies.

His Shadow Government Statistics Web site (shadowstats.com) has become a magnet for those convinced that official data put a happy-talk gloss on the nation’s economy. The growing popularity of the site, which costs subscribers $175 a year, is testimony to the deep suspicion many Americans harbor about government information as the economy falls into a swoon.

“There’s something wrong with the numbers,” said ShadowStats subscriber Harry Seitz, a retiree in Davie, Fla. “Over the years, (Williams) has essentially been proven correct.”

By Williams’ estimation, the government’s calculation that unemployment was 5 percent in April and that inflation was 4 percent and economic growth 2 percent over the last year, is fantasy. It might even be disinformation.

An update e-mailed to ShadowStats subscribers at the beginning of the month warned darkly that “GDP (gross domestic product) and Jobs Data Appear Rigged” and “Despite Manipulated Data, the Recession Deepens.”

By his reckoning, the economy shrank 2.5 percent in the year that ended in March, unemployment is really 13 percent and year-over-year inflation is 7.5 percent.

Government economic data are “out of touch with common experience. That’s why people used to believe the numbers but no longer do,” Williams said during an interview in his modest one-bedroom apartment near Lake Merritt.

ShadowStats, which started in 2004, grew slowly at first, but has recently picked up momentum and now numbers subscribers in the “low thousands,” according to Williams. They’re mostly individual and professional investors, including a fair share of conspiracy theorists and goldbugs, those who believe gold is the best place to put money because of supposedly imminent financial disaster.

Despite his gadfly role, Williams’ pedigree is mainstream. A graduate of Dartmouth College, he once managed a family chain-saw import business. He long ran an economic consulting firm that boasted Fortune 500 companies as clients, and he regularly appeared on television investment programs.

Mainstream is one thing he clearly no longer is. Most experts scoff at his contention that economic data are grossly inaccurate. And they say his claim that data are tampered with for political reasons is preposterous.

“The culture of the Bureau of Labor Statistics is so strong that it’s not going to happen,” said University of Maryland Professor Katherine Abraham, who headed the agency that produces employment and inflation data during the Clinton administration.

Steve Landefeld, director of the Bureau of Economic Analysis, the Commerce Department agency that prepares quarterly GDP reports, said in an e-mail that “the bureau rigorously follows guidelines designed to ensure its work remains totally transparent and absolutely unbiased.”

Indeed, it’s easy to write Williams off as a crank. His views frequently veer toward the conspiratorial. A Fox News interviewer once accused him of being a “grassy knoll theorist.”

He criticizes almost all the major changes made in data gathering and analysis in recent decades, most of which had wide support among experts of all political stripes.

“All of those methodological changes were made after academic economists did decades of research and said they should be done,” said UC San Diego economist Valerie Ramey, a member of the Federal Economic Statistics Advisory Committee.

Still, even those who dismiss Williams concede he makes a few points worth considering.

Abraham rejects most of Williams’ arguments. But, she said, “There may be grains of truth in some of what he’s saying.”

Williams produces his online newsletter in his living room, under the dour portraits of earlier generations of Williamses, one of whom was pilloried in London during the 18th century for publishing material that mocked the king. Williams, who is divorced, moved to Oakland in October from New Jersey so he could be near his son.

According to Williams, government data are subject to two kinds of manipulation.

The first consists of technical changes in the way data are collected or interpreted. These have been fully disclosed, discussed in advance and reviewed by outside experts.

“Although it might make academic sense, it does not reflect the real-world experience of ordinary people,” he argued. “The effect over time is to give a more rosy scenario.”

For example, over the last 25 years, several technical changes have been made in the way the consumer price index is calculated:

— In the 1980s, the Bureau of Labor Statistics switched from using house prices to equivalent rental prices in calculating homeowner inflation.

— About a decade ago, the bureau shifted to a model in which consumers are assumed to switch some of their purchases within narrowly defined categories from items that have gone up in price to other items that have risen less, such as buying round steak instead of porterhouse.

— The bureau has long adjusted prices for quality improvements. If a product gets better or if useful features are added, its price is adjusted down. Thus, with automobiles, additions such as antilock brakes have sometimes resulted in price decreases in calculating the CPI, even though the actual cost of cars went up. In the late 1980s and 1990s, new quality-adjustment techniques were introduced for a range of products, including washers, dryers and televisions.

Each of these changes has had the effect of reducing the reported inflation rate, according to Williams.

The second kind of alleged manipulation is more sinister. “It’s where a number is changed for specific political or financial market needs,” Williams said.

Williams said both Democratic and Republican administrations have carried out such trickery, citing supposed examples going back to President Lyndon Johnson.

He accused the current Bush administration of taking advantage of a switch to monthly instead of semiannual seasonal adjustment of job creation data to “bring the number in where they want it,” though he admitted he had no evidence.

Bureau officials said they were mystified by accusations that the agency falsifies data. The 2003 shift to monthly seasonal adjustment of jobs data “was recognized statistically as a better way,” said Assistant Commissioner Patricia Getz.

In any case, she noted, payroll figures are matched once a year with tax records to produce an accurate tabulation of the number of jobs in the economy.

Williams arrives at his alternative GDP, employment and inflation statistics by reverse-engineering the data, backing out changes made over time. In the same way that every change carried out by the government made the economy look rosier, each of Williams’ adjustments makes things appear worse.

With unemployment, for example, Williams takes the standard jobless rate – 5 percent in April – which consists of people who have looked for work within the last 30 days. Then he adds in several other categories tabulated by the Labor Department, including those who say they have looked for a job in the last year but have given up and those who are working part-time but want a full-time job. Finally, he throws in several million people who say they want work, but haven’t looked in more than a year. Voila – 13 percent unemployment.

His outlook hasn’t wavered over the years. A 1989 USA Today article referring to Williams as a “gloom-and-doom economist” noted his prediction that the Dow Jones industrial average would crash below 1,500 by the end of that year. It closed that year at 2,753.

Most economists don’t buy Williams’ method of calculating unemployment. In any case, they point out, the Bureau of Labor Statistics publishes the raw data, so all are free to use whatever measure they prefer.

When it comes to inflation, though, a few of Williams’ arguments get a sympathetic hearing, especially the idea that marking down prices for quality improvements doesn’t jibe with the way most people see inflation.

“If anything, the CPI understates inflation for the average household,” said Irwin Kellner, chief economist for the online investment news service MarketWatch. “Car prices might be down 5 or 10 percent in the CPI, but in reality, when you go to the dealer, you’re paying more.”

And while there’s not much patience for Williams’ claim of outright falsification, the idea that politics influences government statistics is not entirely far-fetched.

In the 1990s, for example, Republicans wanted to make changes in calculating inflation along the lines recommended by a special commission, including more use of quality adjustments. By lowering the official inflation rate, such changes promised to reduce the annual cost-of-living adjustments for Social Security and other federal programs.

“He said to me, ‘If you could see your way clear to doing these things, we might have more money for BLS programs.’ ”

The world according to Williams