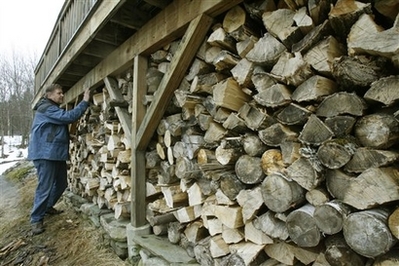 A few years ago, Kathleen Breault was just another suburban grandma, driving countless hours every week, stopping for lunch at McDonald’s, buying clothes at the mall, watching TV in the evenings.

That was before Breault heard an author talk about the bleak future of the world’s oil supply. Now, she’s preparing for the world as we know it to disappear.

Breault cut her driving time in half. She switched to a diet of locally grown foods near her upstate New York home and lost 70 pounds. She sliced up her credit cards, banished her television and swore off plane travel. She began relying on a wood-burning stove.

Convinced the planet’s oil supply is dwindling and the world’s economies are heading for a crash, some people around the country are moving onto homesteads, learning to live off their land, conserving fuel and, in some cases, stocking up on guns they expect to use to defend themselves and their supplies from desperate crowds of people who didn’t prepare.

The exact number of people taking such steps is impossible to determine, but anecdotal evidence suggests that the movement has been gaining momentum in the last few years.

These energy survivalists are not leading some sort of green revolution meant to save the planet. Many of them believe it is too late for that, seeing signs in soaring fuel and food prices and a faltering U.S. economy, and are largely focused on saving themselves.

Some are doing it quietly, giving few details of their preparations — afraid that revealing such information as the location of their supplies will endanger themselves and their loved ones. They envision a future in which the nation’s cities will be filled with hungry, desperate refugees forced to go looking for food, shelter and water.

“There’s going to be things that happen when people can’t get things that they need for themselves and their families,” said Lynn-Marie, who believes cities could see a rise in violence as early as 2012.

Lynn-Marie asked to be identified by her first name to protect her homestead in rural western Idaho. Many of these survivalists declined to speak to The Associated Press for similar reasons.

These survivalists believe in “peak oil,” the idea that world oil production is set to hit a high point and then decline. Scientists who support idea say the amount of oil produced in the world each year has already or will soon begin a downward slide, even amid increased demand. But many scientists say such a scenario will be avoided as other sources of energy come in to fill the void.

On the PeakOil.com Web site, where upward of 800 people gathered on recent evenings, believers engage in a debate about what kind of world awaits.

Some members argue there will be no financial crash, but a slow slide into harder times. Some believe the federal government will respond to the loss of energy security with a clampdown on personal freedoms. Others simply don’t trust that the government can maintain basic services in the face of an energy crisis.

The powers that be, they’ve determined, will be largely powerless to stop what is to come.

Determined to guard themselves from potentially harsh times ahead, Lynn-Marie and her husband have already planted an orchard of about 40 trees and built a greenhouse on their 7 1/2 acres. They have built their own irrigation system. They’ve begun to raise chickens and pigs, and they’ve learned to slaughter them.

The couple have gotten rid of their TV and instead have been reading dusty old books published in their grandparents’ era, books that explain the simpler lifestyle they are trying to revive. Lynn-Marie has been teaching herself how to make soap. Her husband, concerned about one day being unable to get medications, has been training to become an herbalist.

By 2012, they expect to power their property with solar panels, and produce their own meat, milk and vegetables. When things start to fall apart, they expect their children and grandchildren will come back home and help them work the land. She envisions a day when the family may have to decide whether to turn needy people away from their door.

“People will be unprepared,” she said. “And we can imagine marauding hordes.”

So can Peter Laskowski. Living in a woodsy area outside of Montpelier, Vt., the 57-year-old retiree has become the local constable and a deputy sheriff for his county, as well as an emergency medical technician.

“I decided there was nothing like getting the training myself to deal with insurrections, if that’s a possibility,” said the former executive recruiter.

Laskowski is taking steps similar to environmentalists: conserving fuel, consuming less, studying global warming, and relying on local produce and craftsmen. Laskowski is powering his home with solar panels and is raising fish, geese, ducks and sheep. He has planted apple and pear trees and is growing lettuce, spinach and corn.

Whenever possible, he uses his bicycle to get into town.

“I remember the oil crisis in ’73; I remember waiting in line for gas,” Laskowski said. “If there is a disruption in the oil supply it will be very quickly elevated into a disaster.”

Breault said she hopes to someday band together with her neighbors to form a self-sufficient community. Women will always be having babies, she notes, and she imagines her skills as a midwife will always be in demand.

For now, she is readying for the more immediate work ahead: There’s a root cellar to dig, fruit trees and vegetable plots to plant. She has put a bicycle on layaway, and soon she’ll be able to bike to visit her grandkids even if there is no oil at the pump.

Whatever the shape of things yet to come, she said, she’s done what she can to prepare.