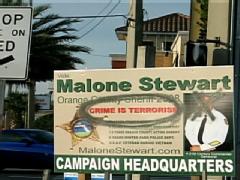 ORANGE COUNTY, Fla. — A campaign slogan may have sparked a string of vandalism aimed at a candidate for Orange County sheriff.

“These are like $600, $700 signs,” said Franklin Cordona, campaign manager for Malone Stewart.

“No, they cost too much,” Cordona said when asked if the vandalism was a publicity stunt.

In addition to the vandalism, the campaign says they have also received threatening phone calls.