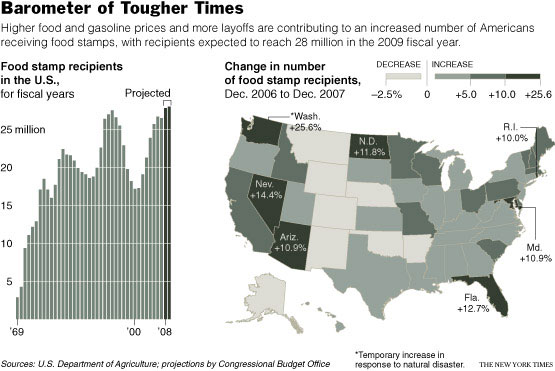 Federal benefit costs are projected to rise to $36 billion in the 2009 fiscal year from $34 billion this year.

“People sign up for food stamps when they lose their jobs, or their wages go down because their hours are cut,” said Stacy Dean, director of food stamp policy at the Center on Budget and Policy Priorities in Washington, who noted that 14 states saw their rolls reach record numbers by last December.

One example is Michigan, where one in eight residents now receives food stamps. “Our caseload has more than doubled since 2000, and we’re at an all-time record level,” said Maureen Sorbet, spokeswoman for the Michigan Department of Human Services.

The climb in food stamp recipients there has been relentless, through economic upturns and downturns, reflecting a steady loss of industrial jobs that has pushed recipient levels to new highs in Ohio and Illinois as well.

“We’ve had poverty here for a good while,” Ms. Sorbet said. Contributing to the rise, she added, Michigan, like many other states, has also worked to make more low-end workers aware of their eligibility, and a switch from coupons to electronic debit cards has reduced the stigma.

In Rhode Island, the number of recipients climbed by 18 percent over the last two years, to more than 84,000 as of February, or about 8.4 percent of the population. This is the highest total in the last dozen years or more, said Bob McDonough, the state’s administrator of family and adult services, and reflects both a strong enlistment effort and an upward creep in unemployment.

In New York, a program to promote enrollment increased food stamp rolls earlier in the decade, but the current climb in applications appears in part to reflect economic hardship, said Michael Hayes, spokesman for the Office of Temporary and Disability Assistance. The additional 67,000 clients added from July 2007 to January of this year brought total recipients to 1.86 million, about one in 10 New Yorkers.

Nutrition and poverty experts praise food stamps as a vital safety net that helped eliminate the severe malnutrition seen in the country as recently as the 1960s. But they also express concern about what they called the gradual erosion of their value.

Food stamps are an entitlement program, with eligibility guidelines set by Congress and the federal government paying for benefits while states pay most administrative costs.

Eligibility is determined by a complex formula, but basically recipients must have few assets and incomes below 130 percent of the poverty line, or less than $27,560 for a family of four.

As a share of the national population, food stamp use was highest in 1994, after several years of poor economic growth, with an average of 27.5 million recipients per month from a lower total of residents. The numbers plummeted in the late 1990s as the economy grew and legal immigrants and certain others were excluded.

But access by legal immigrants has been partly restored and, in the current decade, the federal and state governments have used advertising and other measures to inform people of their eligibility and have often simplified application procedures.

Because they spend a higher share of their incomes on basic needs like food and fuel, low-income Americans have been hit hard by soaring gasoline and heating costs and jumps in the prices of staples like milk, eggs and bread.

At the same time, average family incomes among the bottom fifth of the population have been stagnant or have declined in recent years at levels around $15,500, said Jared Bernstein, an economist at the Economic Policy Institute in Washington.

The benefit levels, which can amount to many hundreds of dollars for families with several children, are adjusted each June according to the price of a bare-bones “thrifty food plan,” as calculated by the Department of Agriculture. Because food prices have risen by about 5 percent this year, benefit levels will rise similarly in June – months after the increase in costs for consumers.

Advocates worry more about the small but steady decline in real benefits since 1996, when the “standard deduction” for living costs, which is subtracted from family income to determine eligibility and benefit levels, was frozen. If that deduction had continued to rise with inflation, the average mother with two children would be receiving an additional $37 a month, according to the private Center on Budget and Policy Priorities.

Both houses of Congress have passed bills that would index the deduction to the cost of living, but the measures are part of broader agriculture bills that appear unlikely to pass this year because of disagreements with the White House over farm policy.

Another important federal nutrition program known as WIC, for women, infants and children, is struggling with rising prices of milk and cheese, and growing enrollment.

The program, for households with incomes no higher than 185 percent of the federal poverty level, provides healthy food and nutrition counseling to 8.5 million pregnant women, and children through the age of 4. WIC is not an entitlement like food stamps, and for the fiscal year starting in October, Congress may have to approve a large increase over its current budget of $6 billion if states are to avoid waiting lists for needy mothers and babies.