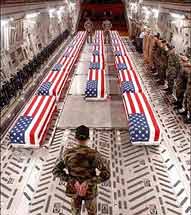 Another soldier was wounded in the attack, a military statement said.

The chaotic and brutal conflict which is now in its sixth year has also wounded more than 29,000 American soldiers, according to icasualties.org.

At least 97 percent of the deaths occurred after US President George W. Bush announced the end of “major combat” in Iraq on May 1, 2003, as the military became caught between a raging anti-American insurgency and brutal sectarian strife unleashed since the toppling of Saddam.

Despite the losses, Bush on the eve of the war’s fifth anniversary defended his decision to invade Iraq, vowing no retreat as he promised American soldiers would triumph despite the “high cost in lives and treasure.”

US military spokesman in Baghdad, Rear Admiral Gregory Smith, said the loss of every soldier was “tragic”.

“No casualty is more or less significant than another; each soldier, marine, airman and sailor is equally precious and their loss equally tragic,” Smith told AFP.

“Being in the military means we are willingly in harm’s way to protect others in order to bring hope and a sustainable security to the Iraqi people.”

According to icasualties.org, 81.3 percent of the soldiers killed have died in attacks by Al-Qaeda in Iraq fighters, Sunni insurgent groups loyal to Saddam and radical Shiite militias.

Roadside bombs caused most of the casualties, with small arms fire the second biggest killer.

Around 40 percent of those killed were struck by roadside bombs, according to the website, making these weapons the main cause of fatalities.

American soldiers interviewed by AFP in Iraq expressed sorrow over the casualties but insisted the conflict was justified.

“It’s sad that the number is that high. It makes you wonder if there is a different way of approaching things. Nobody likes to hear that number,” said senior Airman Preston Reeves, 26, from Birmingham, Alabama.

“Everyone of those people signed up voluntarily and its a shame that that happens, but tragedies do happen in war.”

Reeves said it was depressing that the support back home was receding.

“It’s a shame you don’t get support from your own country, when all they want you to do is leave Iraq and all these people will have died in vain,” he told AFP.

The military death toll is one of the key elements of the US 2008 presidential elections for Democrat candidates Hillary Clinton and Barack Obama, who are calling for the withdrawal of troops.

The deadliest war for the US military, aside from the two world wars, has been Vietnam, with 58,000 soldiers killed between 1964 and 1973, an average of 26 a day. On average, just over two US soldiers die every day in Iraq.

The icasualties.org statistics reveal that the deadliest year for the military in Iraq was 2007 when it lost 901 troops on the back of a controversial “surge”, which saw an extra 30,000 soldiers deployed in a bid to break the stranglehold of violence that has killed tens of thousands of Iraqis.

US military commanders in Iraq acknowledge that putting extra troops on the ground also exposed them to more attacks.

In recent months the military has begun withdrawing the surge troops as violence levels fall across the country, with US and Iraqi officials reporting a 60-percent drop in attacks since June.

Most of the attacks in the past five years have been staged in four of Iraq’s 18 provinces.

The western Sunni province of Anbar witnessed most overall casualties, with 1,282 losses since the US-led invasion, according to icasualties.org, followed by Baghdad with 1,255, Salaheddin with 376, and Diyala with 238.

In Anbar and Salaheddin the military faced a strong anti-American insurgency, while in Baghdad and Diyala it has been caught in a three-way fight involving Al-Qaeda, Sunni groups loyal to Saddam and Shiite militias.

But for the past year attacks against US troops have fallen sharply in Anbar after local Sunni Arab groups joined forces with the US military to fight Al-Qaeda in Iraq.

According to the website, November 2004 remains the deadliest month for the US military in Iraq.

It lost 137 troops that month when it launched a massive assault to take back the Anbar city of Fallujah, then a Sunni insurgent bastion.

The US state of California has borne the brunt of American losses, with at least 426 soldiers killed in the conflict.

The US military is also searching for four of its soldiers missing in Iraq.

Two of them were captured in May last year after insurgents ambushed their patrol south of Baghdad in an attack which killed four other soldiers and their interpreter.

Al-Qaeda in Iraq in a later Internet message said it had kidnapped and killed the soldiers. The military says it is still searching for them.

Apart from deaths due to hostile fire, 145 soldiers have died due to “self-inflicted wounds,” the website said, indicating a large number of suicides.