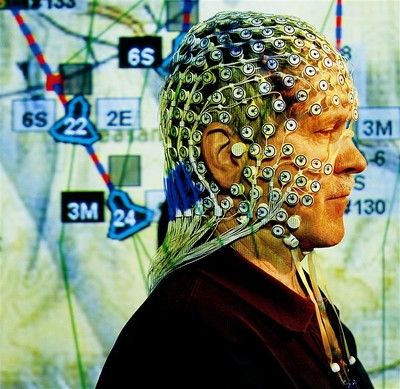 This Air Force has also handed out a contract to Quantum Applied Science and Research, Inc. — that’s right, QUASAR for short — to perfect a mind-reading interface for squads of killer drones.  Supervising all those armed, flying robots might be doable when things are relatively calm.  But, in the heat of battle, it might be too much for one puny human mind to handle unassisted.

Darpa isn’t done with these technologies, either.  The agency plans to spend $12 million next year on brain-science programs like Neurotechnology for Intelligence Analysts.  It’s an AugCog-inspired effort to tap the firings of the subconscious mind to sort through satellite pictures quickly.  Early tests have shown as much as a six-fold increase in the analysts’ efficiency, when the computer and the brain work together.