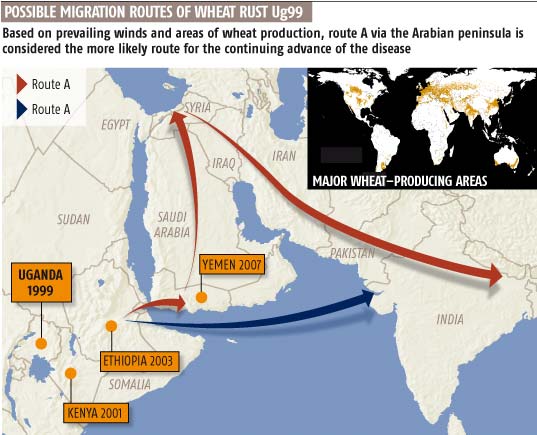 The disease is Ug99, a virulent strain of black stem rust fungus (Puccinia graminis), discovered in Uganda in 1999. Since the Green Revolution, farmers everywhere have grown wheat varieties that resist stem rust, but Ug99 has evolved to take advantage of those varieties, and almost no wheat crops anywhere are resistant to it.

The strain has spread slowly across east Africa, but in January this year spores blew across to Yemen, and north into Sudan (see Map). Scientists who have tracked similar airborne spores in this part of the world say it will now blow into Egypt, Turkey and the Middle East, and on to India, lands where a billion people depend on wheat.

There is hope: this week scientists are assessing the first Ug99-resistant varieties of wheat that might be used for crops. However, it will take another five to eight years to breed up enough seed to plant all our wheat fields.

The threat couldn’t have come at a worse time. Consumption has outstripped production in six of the last seven years, and stocks are at their lowest since 1972. Wheat prices jumped 14 per cent last year.

Black stem rust itself is nothing new. It has been a major blight on wheat production since the rise of agriculture, and the Romans even prayed to a stem rust god, Robigus. It can reduce a field of ripening grain to a dead, tangled mass, and vast outbreaks regularly used to rip through wheat regions. The last to hit the North American breadbasket, in 1954, wiped out 40 per cent of the crop. In the cold war both the US and the Soviet Union stockpiled stem rust spores as a biological weapon.

After the 1954 epidemic, Borlaug began work in Mexico on developing wheat that resisted stem rust. The project grew into the International Maize and Wheat Improvement Center, known by its Spanish acronym CIMMYT. The rust-resistant, high-yielding wheat it developed banished chronic hunger in much of the world, ended stem rust outbreaks, and won Borlaug the Nobel peace prize in 1970.

Yet once again Borlaug – now 93 and fighting cancer – is leading the charge against his old enemy. When Ug99 turned up in Kenya in 2002, he sounded the alarm. “Too many years had gone by and no one was taking Ug99 seriously,” he says. He blames complacency, and the dismantling of training and wheat testing programmes, after 40 years without outbreaks.

Now a Global Rust Initiative (GRI) is under way at CIMMYT. It’s head, Rick Ward, blames the delay on cuts, starting in the 1980s, in CIMMYT’s funding for routine monitoring and maintenance of crops and pests.

“CIMMYT was slow to detect the extent of susceptibility to Ug99 [because] it didn’t have the scientific eyes and ears on the ground any more,” says Chris Dowswell of CIMMYT. “Once it did, it had to start a laborious fund-raising campaign to respond.”

Ward is now being promised adequate support as fears grow in rich wheat-growing countries, but meanwhile Ug99 has got worse. It was first noticed because it started appearing on wheat previously protected by a gene complex called Sr31, the backbone of stem rust resistance in most wheat farmed worldwide. Then last year it acquired the ability to defeat another widely used complex, Sr24. “Of the 50 genes we know for resistance to stem rust, only 10 work even partially against Ug99,” says Ward. Those are present in less than 1 per cent of the crop.

The first line of defence is fungicide, but the poor farmers who stand to lose most from the blight generally cannot afford it, or don’t have the equipment or know-how to apply it. CIMMYT is considering “fire brigade” spray teams armed with cheap, generic fungicides in poor areas. However, they will be competing with the rich for fungicide, and depending on where Ug99 strikes, stocks could be limited.

Even rich countries face problems. The US has been fighting soybean rust with fungicide ever since spores blew in on hurricane Ivan in 2004. If Ug99 arrives as well, the US could be in trouble because it doesn’t make enough fungicide for both crops. Kitty Cardwell of the US Department of Agriculture says there might be enough if the US fights Ug99 the same way as it is tackling soya rust: spotting outbreaks with a fast DNA-based field test and posting the results on an interactive website (www.sbrusa.net), so farmers spray only when danger looms. Ultimately, says Ward, the only real answer “is to get new, resistant varieties out there”.

CIMMYT has been working on this by taking countries’ top-yielding varieties and crossing them with wheat from its seed collections that does resist Ug99. For two years now the crosses have been tested for resistance at field stations in Njoro, Kenya, and in Ethiopia, where it is safe to release Ug99 as it is already there. Resistant strains are sent back to CIMMYT in Mexico and assessed for yield and other qualities, then sent out again for further tests. Resistant lines are now being grown on 27 plots in Nepal, India, Afghanistan and Pakistan.

So far so good, but the real challenge is multiplying up enough resistant seed so that if Ug99 hits, there will be enough to plant the next crop. This takes time – and it will only happen if the new resistant varieties match or exceed existing yields. Nor is it an exact science. No one knows why wheat that looks good in Mexico might grow as well in Egypt, say, but fail in China unless it is crossed with a local variety.

There is nothing for it but to do the tests, says Ravi Singh, the GRI’s chief wheat pathologist. The resistant lines must be just as good as the ones people are growing now, he says, or farmers won’t use them, and government-owned seed companies that dominate the wheat industry in developing countries won’t sell them, no matter what new disease the scientists say is coming.

Singh calculates that if he can get countries to devote 3 to 5 per cent of their wheat-growing area to resistant varieties, the seed harvest will be enough to plant the whole country with resistant wheat if Ug99 hits.

So it’s a race, and who wins depends on what Ug99 does now. Stem rust can arrive in a new area and lurk for years before it gets the right conditions for an outbreak. “It won’t suddenly explode everywhere. It will be like a moving storm,” says Dowswell.

However, Ug99 has another ace up its sleeve. The spores blowing in the wind now are from the asexual stage that grows on wheat. If any blow onto the leaves of its other host, the barberry bush (Berberis vulgaris), they will change into the sexual form and swap genes with whatever other stem rusts they find. Barberry is native to west Asia. “As if it wasn’t challenging enough breeding varieties that resist this thing,” laments Ward. “All I know is that what blows into Iran will not be the same as what blows out.”

What’s more, Ug99 will find agriculture has changed to its liking in the decades stem rust has been away. “Forty years ago most wheat wasn’t irrigated and heavily fertilised,” says Borlaug. Now, thanks to the Green Revolution he helped bring about, it is. That means modern wheat fields are a damper, denser thicket of stems, where dew can linger till noon – just right for fungus.

Another worry is that travel has exploded in the past 40 years. There have now been several documented cases of travellers carrying rust spores on their clothing. Some fear Ug99 will hitchhike as much as it flies – and its spread need not be innocent. New Scientist has learned that the US Department of Homeland Security met in March to discuss the possibility that someone could transport Ug99 deliberately.

Even at 93, Borlaug is looking to the long term. Eventually, scientists will have to create wheat with a wide spectrum of resistances. The genes may be hiding in other grains and grasses. “Why has rice had no rusts for millions of years?” he asks.

For now, Borlaug says, we have to rely on fungicides, wheat breeding and luck. “We’re moving as fast as we can now, but we started three years too late,” he says. “We’d better have some good luck. Governments think this is still small and local, but these things build up.”
From issue 2598 of New Scientist magazine, 03 April 2007, page 6-7