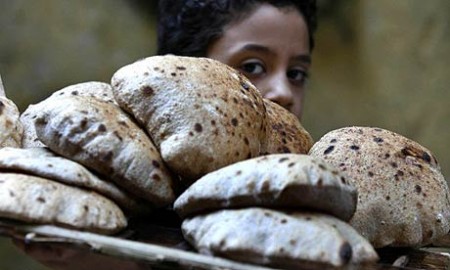 A child carries a tray of bread in Cairo. Photograph: Nasser Nuri/Reuters

World leaders are to meet next week for urgent talks aimed at preventing tens of millions of the world’s poor dying of hunger as a result of soaring food prices.

The summit in Rome is expected to pledge immediate aid to poor countries threatened by malnutrition as well as charting longer-term strategies for improving food production.

Hosted by the UN’s Food and Agriculture Organisation, it will hear calls for the establishment of a global food fund, as well as for new international guidelines on the cultivation of biofuels, which some have blamed for diverting land, crops and other resources away from food production.

The urgency of the meeting follows historic spikes in the price of some staple foods. The price of rice has doubled since January this year, while the cost of dairy products, soya beans, wheat and sugar have also seen large increases.

The world’s urban poor have been hit hardest, sending a wave of unrest and instability around the world. Thirty-seven countries have been hit by food riots so far this year, including Cameroon, Niger, Egypt and Haiti.

The Rome summit is the first of a series of high-level meetings aimed at tackling what many leaders now see as a much bigger threat to international stability than terrorism.

A fortnight after the UN meeting, the EU council will focus much of its time on the food crisis. A ministerial meeting of the World Trade Organisation in late June will make a last-ditch attempt in Geneva at agreeing the lowering of international trade barriers, with the aim of cutting food prices and making it easier for farmers in poor countries to export their produce.

Food and climate change will also be the twin top themes of the G8 summit in Japan in early July, and then in September a UN summit will attempt to put the world back on course towards meeting the millennium development goals, agreed eight years ago, one of which was the halving of the number of the world’s hungry.

There is a time for food, and a time for ethical appraisals. This was the case even before Bertolt Brecht gave life to that expression in Die Driegroschen Oper. The time for a reasoned, coherent understanding for the growing food crisis is not just overdue, but seemingly past. Robert Zoellick of the World Bank, an organization often dedicated to flouting, rather than achieving its claimed goal of poverty reduction, stated the problem in Davos in January this year. ‘Hunger and malnutrition are the forgotten Millennium Development Goal.’

Global food prices have gone through the roof, terrifying the 3 billion or so people who live off less than $2 a day. This should terrify everybody else. In November, the UN Food and Agricultural Organization reported that food prices had suffered a 18 percent inflation in China, 13 percent in Indonesia and Pakistan, and 10 percent or more in Latin America, Russia and India. The devil in the detail is even more distressing: a doubling in the price of wheat, a twenty percent increase in the price of rice, an increase by half in maize prices.

Read moreFood Riots are Coming to the U.S.