The energy-rich former Soviet republic of Turkmenistan Thursday devalued its currency against the US dollar by 18%,as AFP notes, in the latest sign of contagion among Russia’s neighbors from the plunging ruble (following Krgyzstan’s 17% plunge in 2014 and Kazakhstan’s 14% tumble). However, as Martin Armstrong warns, this is symptomatic of a deflationary contagion that “will contribute to now force the dollar higher… We are in a major economic collapse on a global scale. Most people do not understand that this is the real threat we face.” 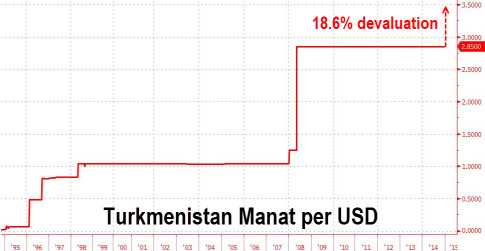 On Thursday, the website of Turkmenistan’s central bank published the rate of 3.50 manats to the US dollar, from 2.85 manats, a depreciation of 18.6 percent.