with Vitamin C and MSM

Health authorities generally set such low limits for the recommended daily allowance (RDA) of vitamins and minerals that obvious deficiencies in most individuals are avoided but so that these nutrients do not become a threat to the pharmaceutical industry by preventing and curing diseases. In this article I like to show what can be done with higher amounts of vitamin C as pioneered by doctors Linus Pauling, Ewan Cameron, Abram Hoffer and others. The results are even better when combined with MSM (methylsulfonylmethane or dimethylsulfone) and DMSO (dimethylsulfoxide).

There are hundreds of vitamin C articles with positive results published in the peer-reviewed Journal of Orthomolecular Medicine (www.orthomed.org) which specializes in vitamin research. In an act of obvious bias the MEDLINE database lists all articles by medical research journals, including Time magazine and Readers’ Digest, but not the Journal of Orthomolecular Medicine. Because all these highly positive studies are not indexed by Medline, proponents of drug medicine can claim that there are no studies showing that vitamin C is useful and safe in the treatment of diseases. 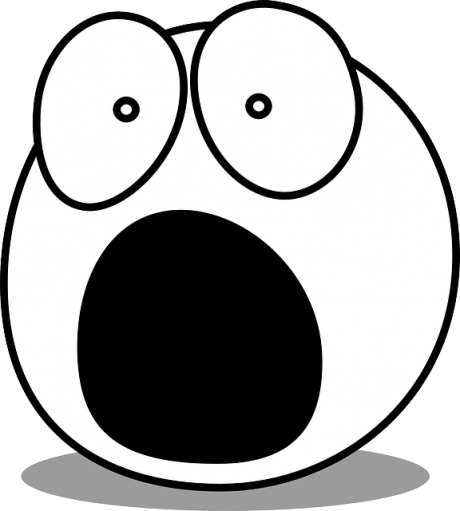 – Copper, China And World Trade Are All Screaming That The Next Economic Crisis Is Here (Economic Collapse, July 23, 2015):

If you are looking for a “canary in a coal mine” type of warning for the entire global economy, you have a whole bunch to pick from right now.  “Dr. Copper” just hit a six year low, Morgan Stanley is warning that this could be the worst oil price crash in 45 years, the Chinese economy is suddenly stalling out, and world trade is falling at the fastest pace that we have seen since the last financial crisis.  In order not to see all of the signs that are pointing toward a global economic slowdown, you would have to be willingly blind.  In recent months, I have been writing article after article detailing how the exact same patterns that happened just before the stock market crash of 2008 are playing out once again.  We are watching a slow-motion train wreck unfold right before our eyes, and things are only going to get worse from here.

Read moreCopper, China And World Trade Are All Screaming That The Next Economic Crisis Is Here

While the PBOC was literally everything in its power to keep the SHCOMP green (it was too late to save the Shenzhen, the Chinext or most Chinese stocks as the PBOC’s firepower was limited to just the largest companies), it forgot about that other proxy of overall Chinese health: copper which, as the chart below shows, plunged by 4% to the lowest price since February when the oil commodity crash left everyone speechless and was threatening to destroy the entire junk bond space. 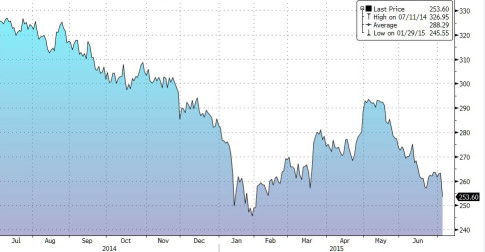 But while in this centrally-planned world, in which nobody even denies anymore that all markets have become central banker playthings, fundamentals are irrelevant and few have a clue what this latest crash in copper may signify (some do, and it isn’t pretty) an even more disturbing clue for the fate of this erstwhile “market doctor” is revealed when looking at the long-term price chart. Here, as SocGen notes, copper is in danger of breaching a huge 15 year support line… after which it is free fall for a long, long time.

Perhaps the world is beginning to realize that “it’s the demand, stupid” as crude oil prices are collapsing this morning (not helped by “all out production” news from Oman). While ‘markets’ rallied peculiarly after last week’s epic surge in inventories and production data, that has all been given back as one trader noted “the market got ahead of itself, even though the rig count has been falling it is not until mid-yr that we are going to see some impact on supply.” WTI is back under $49.  To complete the gloom, Copper is probing lower, breaking key support with projections to 222.50 if this move takes shape.

While we have warned about the problem with near-infinitely rehypothecated physical/funding commodities/metals, be they gold or copper, many times in the past, and most recently here, it was only yesterday that China finally admitted it has a major problem involving not just the commodities participating in funding deals – in this case copper and aluminum – but specifically their infinite rehypothecation, which usually results in the actual underlying metal mysteriously “disappearing”, as in it never was there to begin with.

And disappearing commodities is exactly what we reported yesterday the third largest Chinese port of Qingdao is being investigated for after a source at a local warehouse said that “it appears there is a discrepancy in metal that should be there and metal that is actually there… We hear the discrepancy is 80,000 tonnes of aluminium and 20,000 tonnes of copper, but we hear that the volumes will actually be higher. It’s either missing or it was never there – there have been triple issuing of documentation.” 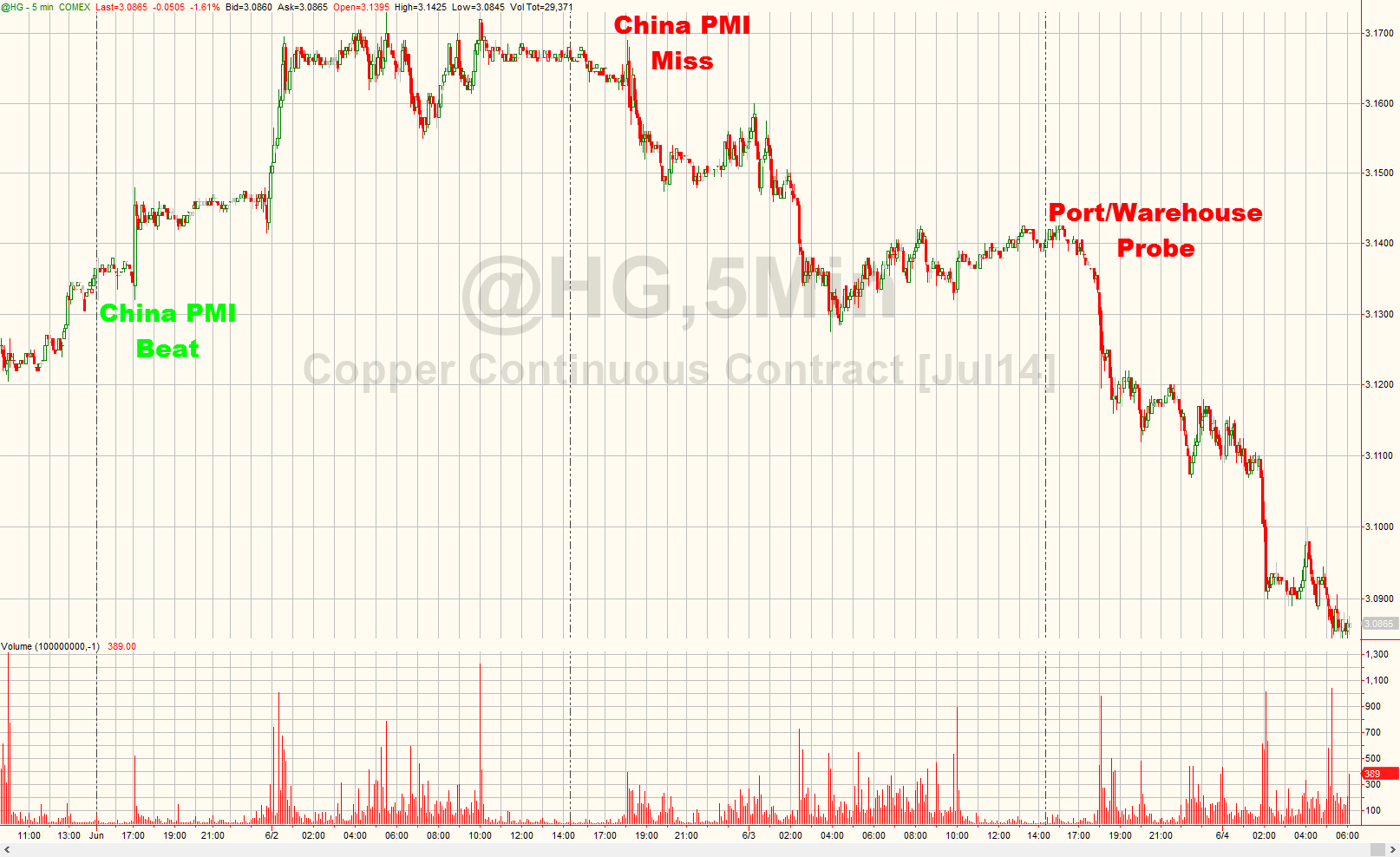 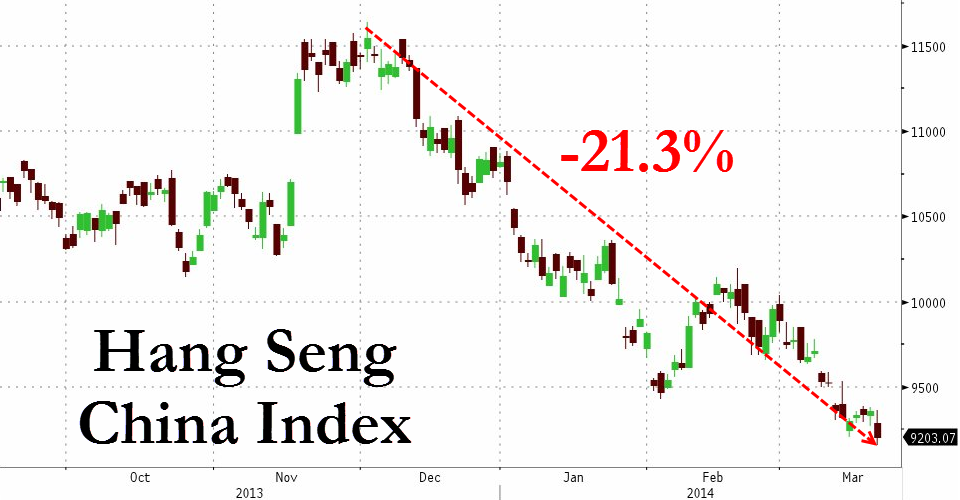 – RECOVERY: Baltic Dry Plunges 8%, Near Most In 6 Years As Iron Ore At Chinese Ports Hits All Time High

Is the price of copper trying to tell us something?  Traditionally, “Dr. Copper” has been a very accurate indicator of where the global economy is heading next.  For example, back in 2008 the price of copper dropped from nearly $4.00 to under $1.50 in just a matter of months.  And now it appears that another big decline in the price of copper is starting to happen.  So far this year, the price of copper has dropped from a high of $3.40 back in January to a price of $2.95 as I write this article, and many analysts are warning that this is just the beginning.  By itself, this should be quite alarming to investors, but as you will see below there are a whole host of other signs that a stock market crash may be rapidly approaching.

Read moreIs ‘Dr. Copper’ Foreshadowing A Stock Market Crash Just Like It Did In 2008?

It would appear the fecal matter is starting to come into contact with the rotating object in China. Worrying headlines are beginning to mount on the back of real economic events (an actual default and a collapse in exports):

Aside from that Iron ore prices are crumbling, Asian stocks are dropping, Chinese corporate bond prices aee falling at their fastest pace in almost 4 months, and all this as 7-day repo drops to one-year lows (as banks hoard liquidity).