The price of key industrial metals has fallen further over the last four months than occurred during the worst years of Great Depression between 1929 and 1933, according to research by Barclays Capital. 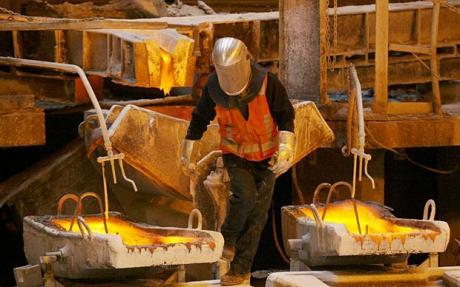 Worker at the Chuquicamata copper mine, 1,000 kms north of Santiago, Chile. Photo: AFP

Kevin Norrish, the bank’s commodities strategist, said the average fall in the price of copper, lead, and zinc has been roughly 60pc since the peak in July this year. All three metals were traded on the London Metal Exchange in the inter-war years so it is possible to make a comparison.

Prices for the three metals fell 40pc from their highs in 1929 before touching bottom in 1933, with the bulk of the fall in 1930 as the slump spread worldwide. “Lead and zinc have already lost more than they did in the 1930s,” he said.

Copper was hit hardest during the Depression, despite the electrification drive in the US and the Soviet Union, falling 70pc at one stage before creeping back in the mid-1930s. The reason was an 85pc fall in US construction, then the biggest user of the metal.

Barclays Capital said the broader equity markets are already discounting the sorts of “savage declines” in corporate profits that were last seen in the Slump. It said (trailing) price to earnings ratios are actually lower now than they were the early 1930s, with moves in credit spreads that suggest investors are anticipating depression-era levels of economic contraction.

The credit markets continued to exhibit signs of extreme stress yesterday. The iTraxx Crossover index measuring default risk on low-grade European bonds punched above 950 for the first time. The investment grade index hit 188. The spreads are now flashing the sort of danger signals seen before the collapse of Lehman Brothers in September.

Each episode of the financial crisis over the last eighteen months has been preceded by a big jump in the iTraxx indexes.