Last week we reported that as part of a rapidly deteriorating banking crisis in Latvia, which culminated with the detention of central bank head Ilmars Rimsevics on suspicion of accepting a bribe of more than €100,000 (which prompted both the prime minister and president to demand his resignation, something he has so far refused to do), the European Central Bank froze all payments by Latvia’s largest private bank, ABLV, following U.S. accusations the bank laundered billions in illicit funds, including for companies connected to North Korea’s banned ballistic-missile program.

Then overnight the Latvian banking crisis escalated when in a statement released early Saturday, the ECB said ABLV Bank’s liquidity had deteriorated significantly, making it unlikely to pay its debts and declaring it “failing or likely to fail.” As a result, Latvia’s third largest bank will be wound up under local laws after the European Central Bank

Following the ECB’s decision, which also included the bank’s subsidiary in Luxembourg, the WSJ reported that Europe’s banking resolution authority decided the banks didn’t represent a systemic risk for their countries or the region and should be wound up by local authorities rather than be “bailed in” under EU rules.

And so, on Saturday ABLV said it would be liquidated. In four days, the bank claimed, it had raised enough capital to meet all its depositors’ demands and keep functioning, however “Due to political considerations the bank was not given a chance to do it,” it said in a statement.

Baltic states continue bolstering their frontiers with Latvia reporting the competition of the first 23km segment of a wire fence on its 276km border with Russia, designed to prevent “illegal immigrants” from breaching the perimeter.

Latvia’s fence construction began in 2015 and the first 23km section is ready, according to local media reports, citing State Border Guards spokeswoman Evgeniya Poznyak. The Latvian government has allocated an additional €6.3 million on the construction and is seeking to build 60km of fence in 2017.

Three sets of military exercises kicked off in Europe on Monday, involving thousands of servicemen from a variety of NATO nations and their allies, amid a wave of similar action across the area.

Estonia is holding its largest-ever military drills. Named Siil-2015 (Hedgehog), the maneuvers involve about 13,000 personnel. The number includes about 7,000 reservists, along with members of the volunteer Estonian Defense League.

Siil-2015, scheduled to last until May 15, also involves forces from the US, the UK, Germany, Latvia, Lithuania, Belgium, Poland and the Netherlands. American troops, who are staying in Estonia as part of the massive training operation Atlantic Resolve, will bring four Abrams main battle tanks to the exercise. British, Belgian and German air defense units, as well as several NATO warplanes, will also take part.

A freight train carrying a whole column of American armored vehicles has been caught on camera in Latvia. Dalbe Railway Station, where the train was reportedly spotted several days ago, is less than 300km from the Russian border.

Latvian authorities have confirmed to Delfi news portal that the train spotted on December 7 was loaded with the vehicles of the 1st Cavalry Division of the US and the train was heading to Lithuania. 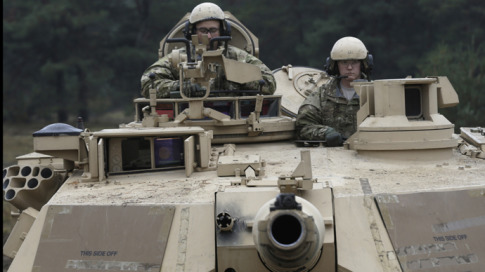 US tanks have arrived in Latvia as NATO flexes its muscles in an apparent show of strength towards Moscow. The machines are being deployed across the Baltic States and Poland over the next two weeks and will be used for training exercises.

The 1st Cavalry Division, based at Fort Hood in Texas, was deployed in Adazi, not far from the Latvian capital of Riga. 150 soldiers used five M1A2 Abrams tanks, as well as 11 Bradley Fighting Vehicles in a training demonstration.

– The Russians Are Outtahere: “The Cypriots Killed Their Country In One Day” (ZeroHedge, March 25, 2013):

It appears the Cypriots (or more clearly the European leaders) do not appreciate the extent to which Russia has propped up the local economy. “When the Russians leave who is going to stay at the Four Seasons for $500 a night? Angela Merkel?” one wealthy Russian asks rhetorically, as The FT reports, they are receiving a deluge of overseas phone calls from helpful Swiss bankers looking to swoop up the deposit transfers. “The locals should understand: as soon as the money leaves, the people who go to restaurants, buy cars and buy property leave too. The Cypriots’ means of living will disappear,” and there are signs that the locals are getting how drastic this situation is, as a large billboard has sprung up at Larnaca Airport with a Russian flag and the words “Brat’ya ne predaite nas!” – “Brothers, don’t betray us!” Many Russian businessmen appear to have one foot out of the door already and are considering whih jurisdiction to move to as they await to see if Medvedev follows through on his threat to dismantle the double tax treaty with Cyprus.

And now the rumors are that billionaire Russian tycoon Roman Abramovich, owner of Chelsea Football Club, has been arrested in the USA.

One Cypriot lawyer with Russian clients said he had already been approached by half-a-dozen European banks in locales ranging from Latvia to Switzerland to Germany, some of them promising they could open new bank accounts for his clients in under an hour.

“The Cypriots killed their country in one day,” says Mr Mikhin, referring to Friday March 15, when President Nicos Anastasides accepted the EU’s proposal to seize €5.8bn in emergency funds from Cyprus’s local and foreign depositors.

Read moreThe Russians Are Outtahere: ‘The Cypriots Killed Their Country In One Day’