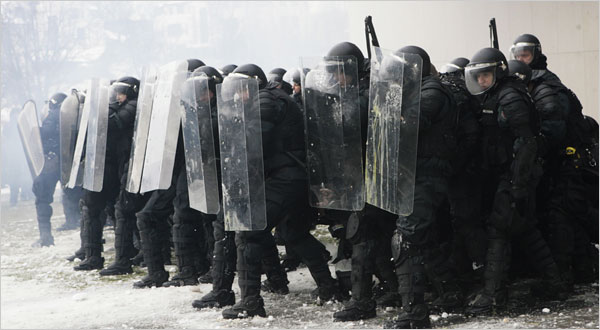 MOSCOW – Riots broke out once again in the Baltic states on Friday, this time in the Lithuanian capital, Vilnius, where a group of 7,000 gathered to protest planned economic austerity measures. A smaller group began throwing eggs and stones through the windows of government buildings until the police moved in, using tear gas and rubber bullets to disperse the crowd.

The episode was nearly identical to one on Tuesday in Latvia, when a peaceful protest of 10,000 people erupted into violence. And on Wednesday, a gathering of 2,000 in Sofia, the Bulgarian capital, began throwing stones and snowballs at the Parliament building, calling for the nation’s leaders to resign.

In all three countries, years of steady economic growth have come to a jarring halt, and citizens are facing layoffs and cuts in wages. In each case, the authorities were left wondering whether they were facing organized activism or just the anger of people whose expectations have been disappointed. “I think this is just the beginning,” said Anders Aslund, a senior fellow at the Peterson Institute for International Economics in Washington. “We should expect this to happen in many places.”

Like its neighbor, Latvia, Lithuania has enjoyed a reputation as a “Baltic Tiger,” buoyed by foreign investment, a housing boom and annual growth rates of around 8 percent. Although Lithuania is not facing as dire an outlook as Latvia, economists predict a 5 percent drop in gross domestic product there next year, and the newly elected Parliament has announced tough austerity measures: workers in the public sector will see pay cuts of up to 15 percent, pensions will fall and an array of taxes will rise.

The Friday demonstration was organized by trade unions, and about 1,500 people were present when violence broke out, said Danute Daunoraviciute, a police spokeswoman, in a telephone interview. She said some protesters had prepared for violence by bringing gasoline-filled bottles. More than 80 people were arrested and 15 injured in the fray, including one protester whose finger was shot off by a rubber bullet.

Ms. Daunoraviciute said that it did not appear that specific political organizations had been behind the violence. “It was a good chance for people to express their social unhappiness,” she said. “They were just angry and tired.”

The authorities are looking closely at the question of “whether they were planned provocations or simply an emotional reaction,” said Rita Grumadaite, a spokesman for Lithuania’s president, Valdas Adamkus. Prime Minister Andrius Kubilius told reporters that he believed the violence was scripted. “There are forces that are interested in destabilization and chaos in Lithuania, and they are using the public’s dismay over painful reforms to achieve their hostile plans,” he said, according to Reuters.

In Latvia, people were still reeling from Tuesday’s riots, the worst there since the fall of the Soviet Union. The largest party in the ruling parliamentary coalition, which was sharply criticized by demonstrators, moved to dissolve Parliament and prepare for spring elections, saying that was “the only possibility to overcome the crisis and return the country to the path of stability.”

“It’s going to bring down the Parliament, and through that the government,” said Krisjanis Karins, a member of Parliament and former leader of the opposition New Era party. “It’s already happening, and the pace is such that nobody really understands.”

Mr. Aslund, the economist, said that the Baltic nations were encountering unrest because their economies were “overheated,” but that similar outbreaks were likely to spread throughout the former Soviet Union. On average, he said, post-Soviet countries have experienced a decade of 8 or 9 percent annual growth, and people have grown to expect it. He said he expected “massive blowups” in Russia and Ukraine, as well as Tajikistan, which will have to absorb as many as one million unemployed guest workers.

In neighboring Estonia, the third of the Baltic tigers, all was quiet on Friday night. Estonia, which enjoyed double-digit growth in recent years, is likely to see its gross domestic product contract in 2009. Still, Marko Mihkelson, a member of the Estonian Parliament, said he thought Estonians would deal with the trouble through political debate. “It is our chance to show that our democracy is much more mature than to just go out into the street and throw things in the windows,” he said.

The financial meltdown is not the only factor throwing Baltic countries off balance this winter, said Julianne Smith, director of the Europe program at the Center for Strategic and International Studies in Washington. The war between Russia and Georgia and the gas deadlock between Russia and Ukraine underlined their vulnerability, she said.

“They’ve spent the better part of the last two decades transforming their economies,” she said. “Suddenly, they wake up and they are no longer the Baltic tigers. When you pair that with the energy concern and acts of Russian intimidation, it definitely can be described as the perfect storm.”