Sweden is preparing to part-nationalise banks exposed to the economic collapse in Baltic states, raising fears that a string of Western European countries could face similar fallout from rising defaults in the former Communist bloc. 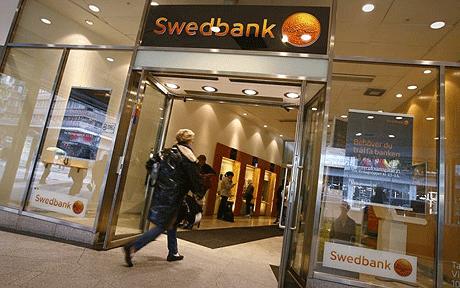 Swedish banks have lent more than $75bn (£46bn) to Latvia, Lithuania and Estonia, led by Swedbank and SEB. Photo: REUTERS

Finance Minister Anders Borg said the Swedish state will buy stakes in distressed banks if they fall deeper into trouble but will impose draconian terms.

“We want to be very clear so that people know what could happen,” he said. “If the banks come to us with big credit losses, where they have previously earned big money on lending, then shareholders will take the consequences. We’re going to be clear that insolvent banks that don’t meet legal requirements will see an injection of funds, primarily through government ownership.”

Swedish banks have lent more than $75bn (£46bn) to Latvia, Lithuania and Estonia, led by Swedbank and SEB.

Hakan Berg, Swedbank’s head of operations in the Baltics, said his bank can cope with the shock losses from devaluations across the region. “We have tested the worst-case scenarios. We have adequate capital. It would not bring the bank down,” he said.

The dramatic situation in Latvia went from bad to worse on Thursday as overnight rates reached 140pc, a sign that the country’s currency peg in Europe’s Exchange Mechanism is close to snapping. Credit default swaps measuring risk on Latvian debt rocketed above 750 after Latvia’s treasury failed to sell a single note at a $100bn debt auction on Wednesday.

Latvian premier Valdis Dombrovskis said the country needs help “fast” from the European commission and International Monetary Fund, which has withheld the latest tranche of its €7.5bn (£6.6bn) bail-out because of the surging budget deficit. “Fears of a domino effect in the region are to a certain extent justified,” he said.

The Baltic trio are all defending currency pegs at overvalued rates in a region where every other country (except Finland) has devalued by a third or so. They are each caught in a trap after allowing mortgage lending in euros and Swiss francs to mushroom out of control. However, there are ways of dealing with this as Argentina proved by passing a law that switched all dollar mortgages into pesos in 2001 – entailing a 70pc “haircut” for foreign creditors.

It is understood that Latvia is quietly exploring options to shield its homeowners from the exchange risk. This risks a bitter clash with Brussels, which has been insisting on peg discipline for ideological reasons – against the advice of the IMF. But the current course amounts to a slow crucifixion of the Baltic economies. Latvia’s GDP is expected to contract by 18pc this year, and Lithuania’s by 15pc.

Samir Patel from BH2 Research said the pegs are causing “monetary asphyxiation” and cannot be endured for long by any democracy. The inevitable devaluations may reach 50pc or more given the experiences of Thailand (52pc) and Indonesia (81pc) in the East Asia crisis. “Of course devaluations will unleash nasty economic and financial demons, but so will stubbornly holding currencies aloft. The demons are simply different,” he said.

It is unclear whether Sweden’s bank troubles are the first sign of broader strains for West European banks, which have lent $1.6 trillion to the former Communist bloc. Sweden’s exposure to the region at 22pc of GDP is not the highest. Austria’s exposure is 70pc of GDP, with $246bn outstanding in Central Europe, Ukraine and the Balkans.

The situation varies from country to country, with the lowest risk in Poland and the Czech Republic. Even so, Danske Bank warns that Austria could face losses reaching 11pc of GDP in an “ugly scenario”. Sweden’s losses would be 6pc, and Belgium’s 3.6pc, the Netherlands’ 2.3pc, and Italy’s 1.5pc.

“The risk of contagion is serious, Nobody thought Iceland would set off a crisis in Hungary last year, but it did, and the same could happen again,” said Lars Christensen, East Europe expert at Danske Bank.