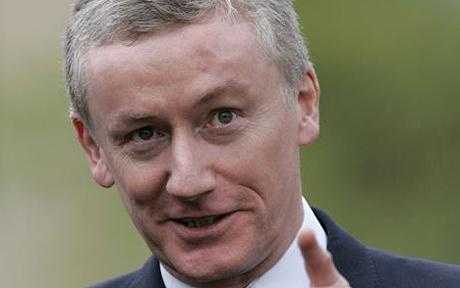 A new row erupted over the pension for Sir Fred Goodwin today when MPs were told the former Royal Bank of Scotland chief executive had taken a £3m lump sum from his £16.9m pension pot – and the bank had paid 40% tax on the payment.

The City minister, Lord Myners, told the Treasury select committee that the board of RBS was “in denial” and had “bent over backwards” to be generous to Goodwin, its departing chief executive, last October when the bank was on the brink of collapse.

Myners revealed that Goodwin had agreed to repay the lump sum, provided his pension entitlement was increased.

It later emerged that the exact sum withdrawn was £2.7m, at a cost to RBS of £4.5m when the tax payment is taken into account, and that Goodwin had not yet returned the sum because there was no agreement with the Revenue that he would not be liable for tax.

Myners, who was accused by MPs of being “bloody naive”, revealed more details of Goodwin’s “extraordinary” pension agreements. The bank treated Goodwin as though he had joined the pension scheme at the age of 20, rather than at 40 when he actually joined. None of his pension savings from previous employers were included in the scheme and 50-year-old Goodwin was allowed to choose his 12-month earnings figure from the best year in the previous decade.

Documents released by the committee show that Peter Cummings, the HBOS executive who ran the division which caused record-breaking losses at the bank, has also been allowed to retire immediately even though he is only 53. He is receiving £352,000 a year after HBOS, now part of Lloyds Banking Group, treated departing executives as if they were made “redundant”.

The firm took short positions in London-based Lloyds and HBOS that were valued at 367 million pounds in September, based on the holdings and share prices on the dates they were reported. The stake fell below the reporting threshold on March 9, regulatory filings show.

Paulson, which made $3 billion anticipating the U.S. housing market would collapse, gained as Lloyds, HBOS and Royal Bank of Scotland Group Plc sought bailouts from British taxpayers. Lloyds surrendered control to the government on March 7 in exchange for asset guarantees. Paulson made least 295 million pounds shorting RBS, bringing its profit from betting U.K. banking stocks would drop to 606 million pounds, according to earlier disclosures.

Read morePaulson May Have Made $428 Million Shorting Lloyds 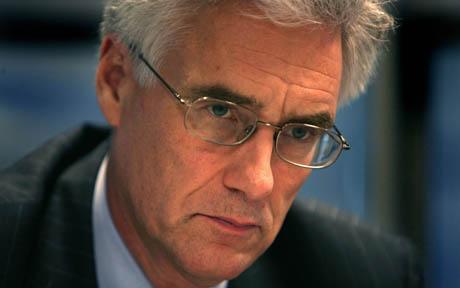 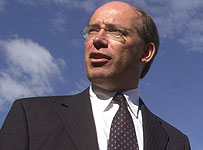 Resigned: Sir James Crosby quit as deputy chairman of the FSA after claims that he sacked a whistleblower who warned the bank was expanding too fast.

The senior banker blamed for the crisis at HBOS came under fresh attack today as it emerged that he is in line for a ‘scandalous’ pension of more than half a million pounds a year.

Sir James Crosby, who was forced to quit as a City regulator last week, is due to get an annual income of £572,000 after building up a pension pot of £10.4m. The Liberal Democrats today urged Sir James to forgo the payout, given the crisis the bank now faces.

The proposed pay-out will cause further embarrassment to the newly created Lloyds Banking Group, which took over HBOS this year.

Taxpayers currently own 43% of Lloyds and HBOS and Chancellor Alistair Darling is expected by many to further nationalise the bank amid plunging share prices. The bumper pension, the details of which are buried in HBOS’s annual report published last week, heaps further pressure on to Sir James.

Last night on BBC’s Newsnight Alistair Darling, the Chancellor, defended both the Government’s role in pushing through the Lloyds takeover of HBOS last October without due diligence and the subsequent £17 billion taxpayer-funded bailout of the merged entity.

“The problem was that last October the banking system was facing imminent collapse,” he said. “We had no alternative but to intervene quickly.We had a matter of days and then hours to stop the entire banking system collapsing. Since then many other countries have done the same thing. The alternative was to let HBOS go down and last October [at such a critical point] the damage would not have stopped there.”

Peter Cummings, left, at a dinner with the Top Shop owner Sir Philip Green in 2007. Mr Cummings was the head of corporate lending at HBOS and the bank’s highest-paid director (Jeremy Young)

HBOS’s aggressive corporate banking division was revealed to have been at the heart of the £10 billion shock loss announced by Lloyds Banking Group yesterday.

Lloyds Banking Group issued a warning that HBOS, the ailing bank it has taken over, made a whopping £7 billion of corporate losses last year after making bad bets on business lending.

Lloyds admitted that HBOS’s corporate division, which was run by Peter Cummings – the highest-paid executive at the bank – has had to write off £7 billion of bad loans, far more than HBOS’s management ever admitted. Mr Cummings is understood to have left in early January with a payoff thought to be about £660,000 and £6 million of pension entitlements.

The announcement leaves taxpayers facing billions of pounds of extra losses on their rescue of Lloyds and HBOS, while politicians are now warning that it is inevitable that the Lloyds Banking Group will need more government money to keep it afloat.

Read morePeter Cummings, the man who broke HBOS with a £7bn loss

A second HBOS whistleblower today claimed there was “a total disregard to the risk process” at the bank under the leadership of former chief executive Sir James Crosby.

Dr Bijan Khandani, a risk manager at HBOS between 2003 and 2005, told the Evening Standard his efforts to protect it against risk were thwarted by senior staff.

“I encountered a lot of resistance,” he said. “I was amazed by this culture where there was a total disregard to the risk process.” 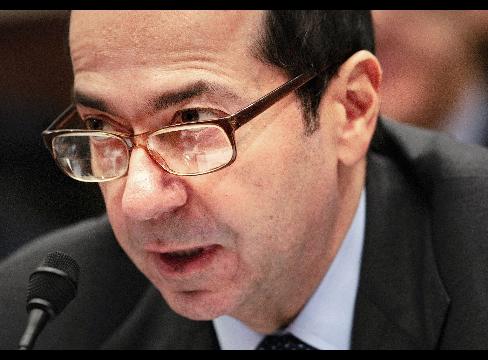 Feb. 13 (Bloomberg) — Paulson & Co., the hedge fund run by billionaire John Paulson, may have made as much as $67 million in 25 minutes today as Lloyds Banking Group Plc lost about 5.9 billion pounds ($8.5 billion) in market value.

Lloyds fell the most in 20 years after saying HBOS Plc, the U.K. lender it took over last month, would report a 10 billion- pound pretax loss. The shares plunged as much as 43 percent in less than 25 minutes of London trading.

Paulson, who made billions from betting against the subprime mortgage market, held a Lloyds short position representing 0.79 percent of the bank, or 129.3 million shares, as of Jan. 20, according to a regulatory filing. DataExplorers.com, which tracks share borrowing from London, said 1.1 percent of the stock was on loan as of Feb. 11, the most recent data available. That’s down from as much as 8 percent six months ago and suggests Paulson held the bulk of the remaining short position.

Read morePaulson May Have Made $67 Million in Lloyds Plunge

HBOS sacked and gagged a senior executive who four years ago warned the board of the bank that they were taking excessive risks, according to evidence given in Parliament this morning.

MPs on the Treasury Select Committee were given details of a submission from the former head of risk at HBOS who claimed that he warned the board repeatedly that they were taking risks with financial stability and consumer protection.

Paul Moore, a former partner of KMPG and head of group regulatory risk at HBOS between 2002 and 2005, accused the bank of “a total failure of all key aspects of corporate governance” and said that he was repeatedly rebuffed and thwarted when he tried to register concern.

In a highly sensitive development he also pointed the finger of blame firmly at Sir James Crosby, the former chief executive of HBOS, who is deputy chairman of the chief City regulator the Financial Services Authority and a senior adviser to the Government.

Disgraced banking boardroom executives at HBOS walked away with cash payments worth hundreds of thousands of pounds each, the Guardian has learned.

Executives were handed the cash after HBOS was rescued by Lloyds TSB and the takeover formally activated a “change of control” clause in their contracts.

The decision to hand over the cash will fuel a mounting row over the pay of bankers in institutions being bailed out with taxpayer funds. There is growing speculation in Westminster that the government will be forced to follow Barack Obama in the US and impose pay restrictions on bank executives who have sought bailouts.

It comes as millions of pounds of bonuses are about to be paid to employees who remain at Royal Bank of Scotland. The cash payments at HBOS were made at the discretion of the bank, which has received £11bn of taxpayer funds and been folded into the Lloyds Banking Group.

The bank is understood to have allowed share-based performance schemes to pay out in cash rather than shares. Such schemes might more ordinarily roll into the shares of the new company.

The directors are thought to have received 10% of the value of the shares at the time they were granted, rather than their current value. Some of the shares were granted at £11 but were valued at less than 70p when the rescue takeover went through.

HBOS sent another wave of panic through the banking industry today after revealing that its bad debts will top £8bn this year, wiping out more than half the £15.5bn of emergency capital raised by the lender so far.

Shares across the sector tumbled, with HBOS crashing 20pc and Lloyds TSB 17pc as HBOS investors gathered in Birmingham and voted on its merger with Lloyds TSB. Preliminary indications show they voted overwhelmingly in favour.

Royal Bank of Scotland was off 17pc and Barclays 13pc by early afternoon, while analysts at Dresdner Kleinwort said “more capital increases [are] virtually inevitable” on top of the £50bn being injected into Britain’s eight largest banks.

HBOS revealed that bad debts on mortgages, credit cards and corporate lending – plus writedowns on “toxic” debts – had reached £8bn in the first 11 months of the year. The figure is a £3.2bn increase since September alone.