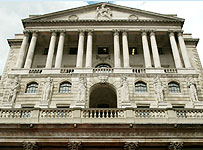 This hypersensitive official stance is thought to be a response to the events of last year when a huge stigma was attached to any lender suspected of going to the Bank for cash help.

The scheme is intended to steady the markets, but it is feared that reports of banks making widespread use of the facility could trigger further instability.

Barclays and HBoS have both confirmed they will use the Bank of England scheme. ‘We welcome the Bank facility and we will participate in it,’ confirmed Andy Hornby, chief executive of HBoS.

Other banks declined to comment, but it is expected that this week all of the leading banks, with the exception of Lloyds TSB, will tender some of their mortgages to the Bank of England.

HBoS confirmed last week it had packaged up £9bn of mortgages ready either for securitisation – in effect, selling them on in the wholesale financial markets – or to be offered to the Bank in return for Treasury bills.

The scheme, drawn up by King and approved by Chancellor Alistair Darling, aims to improve banks’ liquidity by temporarily swapping bundles of mortgages and credit card debt for Treasury bills, which are short-dated Government debt that matures within nine months.

The scheme will run for three years so these bills will be replaced by new ones when required.

Under the plan, bills will be exchanged only for securities rated triple-A – the highest possible grade of security – by at least two of the three big ratings agencies, Fitch, Moody’s and Standard & Poor’s.

It would not normally be considered acceptable for big companies to arrange billions of pounds of financial support without telling their shareholders.

But one source close to major institutional investors said: ‘I can see why there may be a case for secrecy.

‘It may be the lesser of two evils.’

The £50bn or more of Treasury bills involved will dwarf the £17.6bn currently in issue, but the authorities are adamant this will not destabilise the Government debt market.