PDF: Barrie Trower – Wi-Fi: A Thalidomide in the Making.Who Cares? 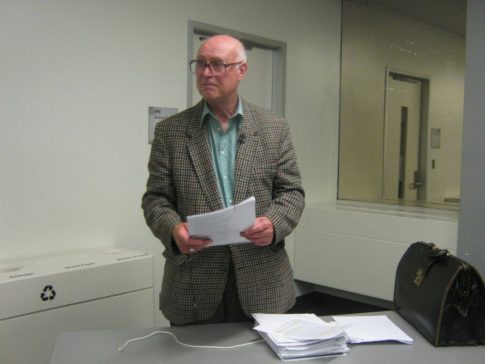 The debate surrounding potentially dangerous Wi-Fi networks in schools has been put to rest by the Ontario education ministry, which feels that if Health Canada endorses the technology as safe, end of story.

But Barrie Trower, a British physicist who carried out research for the Royal Navy and military intelligence into the effects of microwave radiation, has come out of retirement to exhort bodies such as Health Canada to heed his life’s work.

The Star caught up with Trower after his Tuesday lecture at the University of Toronto on the dangers of Wi-Fi technology and other common household sources of microwave radiation.

In the face of its recent declaration that Wi-Fi networks are safe in schools, what would you tell Health Canada?

“That’s wrong. If we know there are no levels safe for children and children are everywhere, how can they be safe? I have never met a single person that has read the ICNIRP (International Commission for Non-Ionizing Radiation Protection) guideline. It says, ‘Children, the elderly and some chronically ill people, might have a lower tolerance for one or more forms of microwave exposure.’ Your government uses a safety threshold of ‘not (greater than) 1,000 microwatts per cm2.’ In 2007 a group of scientists came up with a safety level, the BioInitiative Report. Their level is ‘not 0.1 microwatts per cm2.’ ”

Other than those with “electrosensitivity” why are children so susceptible to illness from Wi-Fi?

“Children are physiologically and neurologically immature. It takes years for the blood-brain barrier to form, leaving children more prone to cell-leakage from microwave radiation. And a person’s immune system, which fights off damage, takes 18 years to develop. In all of the schools I have visited around the world with Wi-Fi, every one has reported the same symptoms in students: fatigue, headaches, nausea, chest pain, vision problems.

You have been invited to advise numerous countries about these dangers, but almost all have ignored the warnings. Why?

“The governments have buried this for 40 years. They have known about these dangers since the research was coming in decades ago. Now, what do they say? They’ve painted themselves into a corner. I think they’re hoping the whole thing will go away. They’re afraid of lawsuits if they admit this is dangerous. And despite all the research that shows microwave radiation is dangerous, no one in the telecom industry has ever admitted it. No one.”

Interesting to note that most of the videos with Barrie Trower that I’ve posted before have been removed from YouTube!!!

Dr. Barrie Trower is a former Royal Navy microwave weapons expert and former cold-war captured spy debriefer for the UK Intelligence Services. Mr Trower is a conscionable whistle-blower who lectures around the world on hidden dangers from microwave weapons and every-day microwave technologies such as mobile-phones and WiFi. Mr Trower has also repeatedly assisted the UK Police Fedration in their struggle to protect police officers from Tetra/Air-Band radio-communications systems that are harmful to health.