Ramsey Clark served as U.S. Attorney General in the administration of Lyndon Johnson. He is the convener of the Commission of Inquiry and a human rights lawyer of world-wide respect. This report was given in New York, May 11, 1991. 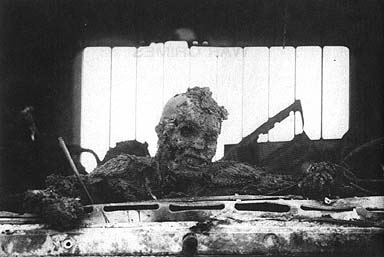 – WAR CRIMES – A Report on United States War Crimes Against Iraq to the Commission of Inquiry for the International War Crimes Tribunal:

by Ramsey Clark and Others

Incinerated body of an Iraqi soldier on the “Highway of Death,” a name the press has given to the road from Mutlaa, Kuwait, to Basra, Iraq. U.S. planes immobilized the convoy by disabling vehicles at its front and rear, then bombing and straffing the resulting traffic jam for hours. More than 2,000 vehicles and tens of thousands of charred and dismembered bodies littered the sixty miles of highway. The clear rapid incineration of the human being [pictured above] suggests the use of napalm, phosphorus, or other incindiary bombs. These are anti-personnel weapons outlawed under the 1977 Geneva Protocols. This massive attack occurred after Saddam Hussein announced a complete troop withdrawl from Kuwait in compliance with UN Resolution 660. Such a massacre of withdrawing Iraqi soldiers violates the Geneva Convention of 1949, common article 3, which outlaws the killing of soldiers who “are out of combat.” There are, in addition, strong indications that many of those killed were Palestinian and Kuwaiti civilians trying to escape the impending seige of Kuwait City and the return of Kuwaiti armed forces. No attempt was made by U.S. military command to distinguish between military personnel and civilians on the “highway of death.” The whole intent of international law with regard to war is to prevent just this sort of indescriminate and excessive use of force.

“It has never happened in history that a nation that has won a war has been held accountable for atrocities committed in preparing for and waging that war. We intend to make this one different. What took place was the use of technological material to destroy a defenseless country. From 125,000 to 300,000 people were killed… We recognize our role in history is to bring the transgressors to justice.”Ramsey Clark