Tweets from Dr. Yuri Hiranuma, June 11, 2014: First death of a USS Ronald Reagan sailor hit by radiation from Fukushima Daiichi while on Operation Tomodachi. Theodore Holcomb, a former USS Ronald Reagan aviation mechanic during Operation Tomodachi, died of synovial sarcoma on April 26, 2014. Holcomb was a plaintiff in the lawsuit against TEPCO. He began experiencing “breathing difficulty, pain in right shoulder, and excessive heart rate while still in service. He was diagnosed with synovial sarcoma next to his heart, causing lung and heart issues, in late 2011. Holcomb was 38 years old and a father of a five-year-old girl.

Read moreNavy sailor suing over Fukushima exposure dies from rare cancer near heart — TV: Navy lieutenant retires, says he’s unable to use leg muscles due to Fukushima radiation and confined to wheelchair — Both in mid-30s (VIDEOS)

– Attorney for US Navy Sailors: Third death from exposure to Fukushima fallout — Baby with brain cancer has died — Reporters afraid to publish stories related to case — Professor: USS Reagan sailors were first people to be hit by plume outside of plant (VIDEOS) (ENENews, July 26, 2015):

Attorney Charles Bonner, representing US service members exposed to Fukushima fallout, Jul 21, 2015 (at 10:45 in): We now have a 250+ young sailors with all kinds of illnesses, we’ve had three die. We had one of the sailors who came home and impregnated his wife. They gave birth to a little baby born with brain cancer and cancer down the spine, lived for two years, and just died in March of this year.

Q&A with Charles Bonner, Jul 21, 2015 (at 4:45 in): I was just interviewed by some reporter about this case, he said, “Now, I want to interview you about this case and the current status of your lawsuit — but, you all have won, so do I have anything to worry about? Do I have to look over my shoulder if I do this story, if I publish this story?” I said, “Yeah you do.” Because trillions of dollars do not go away easily. It’s amazing that people are afraid to even do a story on this because they’re afraid of these corporations.

Read moreAttorney for US Navy Sailors: Third death from exposure to Fukushima fallout — Baby with brain cancer has died — Reporters afraid to publish stories related to case — Professor: USS Reagan sailors were first people to be hit by plume outside of plant (VIDEOS)

– Doctor ‘removed 6 thyroids in recent months’ from USS Reagan crew exposed to Fukushima fallout – ‘Over 500 sailors ill after mission in Japan’ – Officer: ‘There’s sick soldiers everywhere, many in hospitals in San Diego or Hawaii … I don’t know what’s going on’ – Veteran in wheelchair thrown out by physician, ‘You’re faking, you need to leave’

U.S. Navy sailors exposed to radioactive fallout from the Fukushima nuclear disaster have been falling ill, even as the Defense Department insists that they were not exposed to dangerous levels of radiation. Many of the sailors have now joined in a class action lawsuit against Fukushima operators and builders Tokyo Electric Power Company (Tepco), Toshiba, Hitachi, Ebasco and General Electric.

Even if they wanted to — which many do not — the sailors would be unable to sue the Navy. According to a Supreme Court ruling from the 1950s known as the Feres Doctrine, soldiers cannot sue the government for injuries resulting directly from their military service.

KOMO 4 News transcript, Feb 11, 2015 (emphasis added): Men and women sworn to serve, now suffering from mysterious health problems… Local rescuers find themselves battling for the truth — and their own survival… They had no idea of what was happening in coastal Fukushima… 3 of 6 nuclear reactors suffered meltdowns, then several explosions… prevailing winds sent most of that radiation over the Pacific, where the 7th Fleet was positioned… the sailors say no one aboard ship took any extra radiation protection measures [for] “probably about a week”… [Aviation Structural Mechanic Ron] Wright remembers one time the scanners went crazy over his trousers. “It was just being like beep, beep, beep, beep… I lost my pants.”… The Navy continuously reassured them… Within a month of Operation Tomodachi… he started experiencing painful swelling in his groin.  He’s undergone 3 surgeries but expects to suffer pain the rest of his life.  Even more frightening — Wright’s diagnosis of varicocele can lead to male infertility. 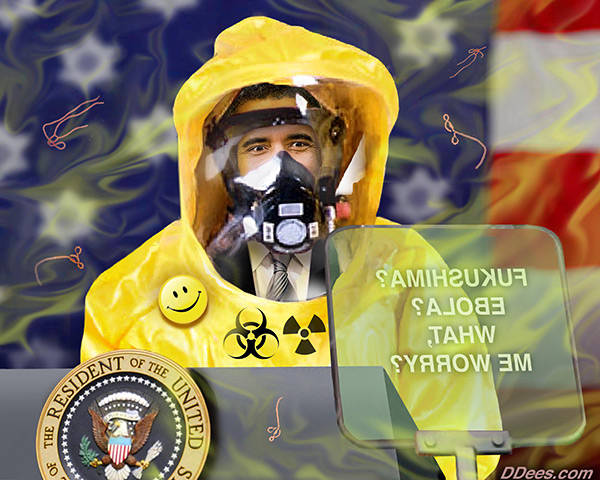 – Doctor “removed 6 thyroids in recent months” from USS Reagan crew exposed to Fukushima fallout — “Over 500 sailors ill after mission in Japan” — Officer: “There’s sick soldiers everywhere, many in hospitals in San Diego or Hawaii… I don’t know what’s going on” — Veteran in wheelchair thrown out by physician, “You’re faking, you need to leave” (VIDEO) (ENENews, Feb 12, 2015): 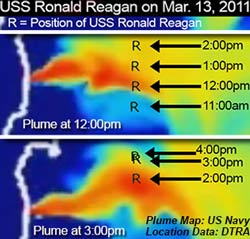 – US sailors “have won the major battle” in Fukushima lawsuit — Now 200 young Navy and Marines with leukemia, organs removed, brain tumors/cancer, blindness, more — Gov’t: Fukushima a terrible tragedy… Navy ships under threat and didn’t know where to go, some ‘very interesting’ moments… That radiation will kill you like a nuclear weapon (VIDEO) (ENENews, Oct 31, 2014):

Stars  & Stripes, Oct. 30, 2014: A US federal judge has ruled that a class-action lawsuit filed by about 200 Navy sailors and Marines can proceed against [TEPCO, GE, EBASCO, Toshiba & Hitachi]…. “It is not over, but we have won the major battle,” lawyer Charles Bonner wrote… “THANK GOD!!!!!” responded Lindsay Cooper, the first USS Ronald Reagan sailor to come forward… [The] ruling was a bit of a surprise… [Sailors] alleged that TEPCO’s misinformation coaxed US forces closer… More ailing servicemembers came forward citing exposure-related ailments such as unexplained cancers, excessive bleeding and thyroid issues… [Attorneys] said additional plaintiffs are continuing to come forward with “serious ailments from radiation”

Bloomberg, Oct. 30, 2014: Judge Janis L. Sammartino… denied the request by [Tepco] to dismiss… Tepco had argued the U.S. military had contributed to the plaintiffs’ harm…

Read moreUS sailors “have won the major battle” in Fukushima lawsuit — Now 200 young Navy and Marines with leukemia, organs removed, brain tumors/cancer, blindness, more — Gov’t: Fukushima a terrible tragedy… Navy ships under threat and didn’t know where to go, some ‘very interesting’ moments… That radiation will kill you like a nuclear weapon (VIDEO)

I know you have been exposed to very high levels of radiation and you need real help or you will get even sicker and die.

I will tell you what to do and where to go to get professional help.

Your medical doctors do not have a clue what to do.

They cannot help you, even if they wanted to.

I can and I will help you, if you contact me.

I will tell you how you can get your life back (free of charge).

Personally I do not believe that one of those sailors will ever contact me, but at least I’ve offered my help.

Isn’t it sad that nobody knows what to do or offers help to them?

I am sure that those health professionals that really know how to help them have never heard about what happened to those sailors off the coast of Japan.

They also probably don’t know how bad Fukushima really was (and still is), because they are too busy teaching their patients how to cure themselves from cancer, diabetes, heart disease, … , etc.

I know that for a fact, because I’ve been one of them.

– Emotional interview with Navy sailor suffering after Fukushima exposure: Others with same symptoms “told to be quiet… nobody’s heard from them” — Health is worsening, worried I’m going to die — Can’t really use legs or arms, hands ‘barely functional’ — Rashes all over body, spasms, shaking — Doctors tell us “it’s all psychological” (AUDIO) (ENENews, July 15, 2014):

– Navy Sailors: Frozen Fukushima steam blanketed ship; Crew suffered massive radiation doses, dozens have cancer — Calls for it to be sunk… still too radioactive; Navy: There’s some contamination, but it’s ok — Tepco: No way US officials would rely on information we were telling to public (ENENews, April 9, 2014):

AP, Apr 7, 2014: Nearly 80 U.S. sailors are […] alleging [Tepco] lied about the high level of radiation in the area [and] repeatedly said there was no danger to the crew when they were actually being blanketed with radiation that has since led to dozens of cancer cases and a child being born with birth defects [Tepco] said that there was no way the commanders of the aircraft carrier would have relied on the utility […] “It’s wholly implausible… military commanders in charge of thousands of personnel and armed with some of the world’s most sophisticated equipment, relied instead only on the press releases and public statements of a foreign electric utility co.”