– Officials want data on U.S. Navy sailors Fukushima exposure — Defense Dept. directed to reveal all medical problems for USS Reagan crew — TV: We were in a nuclear plume, how can they say there’s no health risk? It makes you wonder since “so many people are having problems” (VIDEO) (ENENews, Jan 15, 2014):

Navy Times, Jan. 15, 2014: House and Senate lawmakers want answers on whether U.S. sailors received high doses of [Fukushima] radiation […] In the fiscal 2014 omnibus budget bill, lawmakers direct Assistant Secretary of Defense for Health Affairs Dr. Jonathan Woodson to provide Congress a full accounting of those who served on the carrier Ronald Reagan during the operation and any medical problems they later developed. […] [There are] 71 plaintiffs with ailments ranging from leukemia and thyroid problems to eye diseases and polyps. […] Officials […] have said that, at least for the ground troops who served in the operation, the radiation doses they received were three times lower than those absorbed by an airline flight crew during a typical cross-country trip […] less than a quarter of the annual radiation received from background exposure such as from rocks, sun and soil […] But Congress wants the Defense Department to provide answers nonetheless. Lawmakers requested not only an inventory of any adverse medical conditions experienced by Ronald Reagan sailors, they want a detailed account of actions taken by the service to prevent radiation exposure, minimize it or treat it among affected personnel. […]

U.S. Naval Administrative Officer Steve Simmons served on the USS Ronald Reagan during the 3/11 response, Jan. 15, 2014: “You’re getting spastic and you’re losing sensation in your legs, and you can’t feel your legs when you’re getting 2nd degree burns on them, and how do you explain those things? [“Steve’s leg muscles eventually just gave up, and he’s now confined to a wheelchair to get around”] How do you take a ship and place it into a nuclear plume for five plus hours, how do you suck up nuclear contaminated waste into the water filtration system and think for one minute that there’s no health risk to anybody on board?” 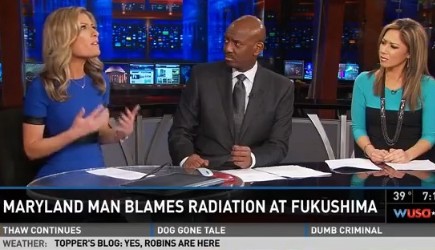 Dr. Robert Peter Gale: “It’s extraordinarily unlikely that it has anything to do with radiation exposure. There’s no toxic agent that we can measure as precise as radiation. It’s very unlikely that the Department of Defense would not have precise data on this.”

Watch Part I and II of WUSA’s broadcast here