– Navy Sailor after Fukushima: I’m in a wheelchair, now it’s spreading to my arms and hands — Photo of skin with intense red burns after being in sun, suspects radiation intensified impact (AUDIO) (ENENews, Jan 20, 2014):

Interview with Navy Lt. Steve Simmons, Living on Earth, Jan. 17, 2014: […] We returned from deployment [aboard the USS Ronald Reagan] in September and by November my health started to decline. The first thing I noticed, I was actually driving to work, and I blacked out, and I drove my truck up on a curb. And I had gone to see the doctor to see what was going on. They ran labs, couldn’t figure anything out, and from there they sent me up to Walter Reed, to the infectious disease clinic, and same thing […] By this point [in January], I unexpectedly dropped between 20 to 25 pounds and my lymph nodes started swelling. From January to March I was running a pretty solid fever as high as 102.9. I was discharged from the hospital the first time for a so-called “sinus infection”, and three days later I was actually readmitted because that’s when my lymph nodes started swelling. During that second hospitalization I was coming out of the restroom and I stopped and my legs just buckled. And that was when the weakness started […] it just started progressing further and further. Then, shortly after that, it got to the point where [my wife] Summer was actually carrying me up and down the stairs. […] I spend all my days in a wheelchair now. My muscle weakness just continued to progress, up the legs, into my arms, my hands. Now the latest issue that I deal with is neurogenic bladder, now the signals aren’t getting from the brain to the bladder, so now I actually have to catheterize every four hours. >> Full broadcast available here 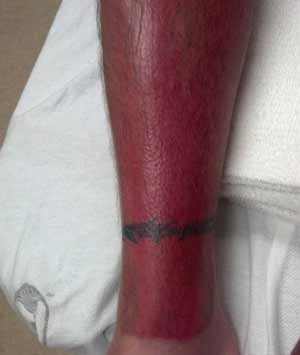 “A second degree burn Simmons received while out in the sun in Hawaii. He suspects that radiation may have intensified the impact” (SOURCE: Steve Simmons)

USA TODAY, Jan. 14, 2014: Sailor blames Fukushima radiation for paralysis — you’re losing sensation in your legs, and you can’t feel your legs when you’re getting 2nd degree burns on them. >> Watch the broadcast here

Lt. Simmons interviewed by Rob Sachs, Jan. 16, 2014: What the DoD’s stance is to this day — it has been the same statement that has been pushed around for years now — that you can get more radiation exposure from one month’s worth of rock, soil and sun […] How can you honestly convince somebody that after you sit in a nuclear plume over 5 hours and after you suck up nuclear contaminated waste into the water filtration system, at what point can you say there is absolutely no harm to human life? You also have aircraft coming back from folks that are stationed in Japan, some of their aircrafts were coming back with aircraft parts that are so highly contaminated that these parts have to be removed, encased, and set out on separate tarmacs for them to be picked up and shipped off to who knows where for a proper decontamination. If that is the case how can you honestly say that there is no threat or no harm to the human body? >> Full interview here

1 thought on “USS Ronald Reagan Sailor After Fukushima: I’m In A Wheelchair, Now It’s Spreading To My Arms And Hands”