WUSA Channel 9, Jan. 11, 2014: Wheelchair-Bound Sailor blames radiation exposure at Fukushima […] He served his country, but has his country turned it’s back on him? […] Steve [Simmons] was 33. That’s when life started changing for this U.S. Naval Administrative Officer. It was eight months after Simmons served on the USS Ronald Reagan […] Steve said his list of ailments was puzzling […]  Doctors could not [explain it]. Steve’s leg muscles eventually just gave up, and he’s now confined to a wheelchair to get around […] The Department of Defense says radiation levels were safe, and were the equivalent to less than a month’s exposure to the same natural radiation you pick up from being near rocks, soil and the sun. Steve doesn’t buy that […] [His wife] Summer says they have to face the facts […] Summer says they desperately want to give their three children a home where, after Steve’s gone, they can feel their father’s presence there. […] 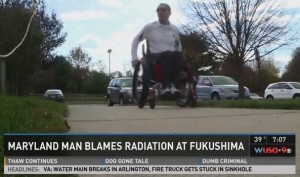 Summer Simmons: “I was just in shock […] This has progressed and no one wants to think about their mortality but realistically we don’t know how much time we have left together.”

Lt. j.g. Steve Simmons, U.S. Navy: “I blacked out on Route 50 and drove my truck up on a curb. […] You’re starting to run fevers, your lymph nodes start swelling, you’re having night sweats, you’re getting spastic, and you’re losing sensation in your legs, and you can’t feel your legs when you’re getting 2nd degree burns on them. How do you explain those things? […] As far as the big picture we still don’t have a diagnosis of what this is, still struggling to even get a doctor to acknowledge that radiation had anything to do with it. […] How do you take a ship and place it into a nuclear plume for five plus hours, how do you suck up nuclear contaminated waste into the water filtration system and think for one minute that there’s no health risk to anybody on board?”

Dr. Robert Peter Gale, radiation’s effects expert: “I feel badly about it, but it’s extraordinarily unlikely that it has anything to do with radiation exposure. There’s no toxic agent that we can measure as precise as radiation. It’s very unlikely that the Department of Defense would not have precise data on this.”

Watch Part I of the WUSA broadcast here