For more information see this: 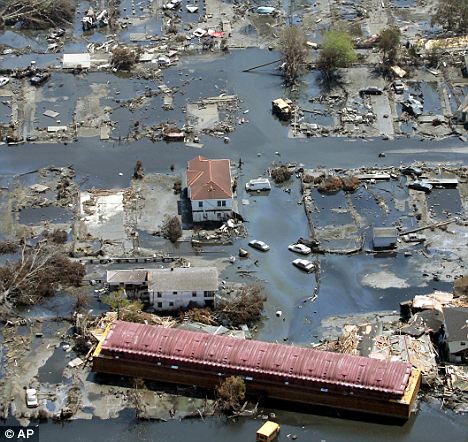 A barge sits in a New Orleans neighbourhood destroyed by Hurricane Katrina in 2005. The population of the city is nearly 30 per cent lower than it was in the years before the natural disaster

Over five years after Hurricane Katrina devastated New Orleans, the aesthetic scars may be slowly healing but the impact clearly still remains – as it was revealed that the population of the city is nearly 30 per cent smaller than a decade ago.

The Louisiana city, which was the 24th biggest city in the U.S. two decades ago, is now languishing as the 53rd most populated.

According to the Census Bureau, just 343,829 people were living in the city as of April 1 last year.

NEW ORLEANS (AP) – The Federal Emergency Management Agency is requesting immunity from lawsuits filed on behalf of Gulf Coast hurricane victims who claim they were exposed to dangerous fumes while living in government-issued trailers.

NEW ORLEANS (AP) – Imagine that your home was reduced to mold-covered wood framing by Hurricane Katrina.

Desperate for money to rebuild, you engage in a frustrating bureaucratic process, and after months of living in a government-provided trailer that gives off formaldehyde fumes you finally win a federal grant.

Then a collector announces that you have to pay back thousands of dollars.

Thousands of Katrina victims may be in that situation.

Read moreKatrina Victims May Have to Repay Money