And to refresh your memory:

And now Bloomberg has changed the beginning of the article below to:

Conclusions by the National Commission on the BP Deepwater Horizon Oil Spill, released yesterday, failed to account for changes BP ordered to the cement just before the April 20 blast, the Houston-based company said in a statement. Halliburton rose in New York trading, after falling 8 percent yesterday spurred by concerns the report may subject the company to increased liability for the spill.”

Now here is the original article … 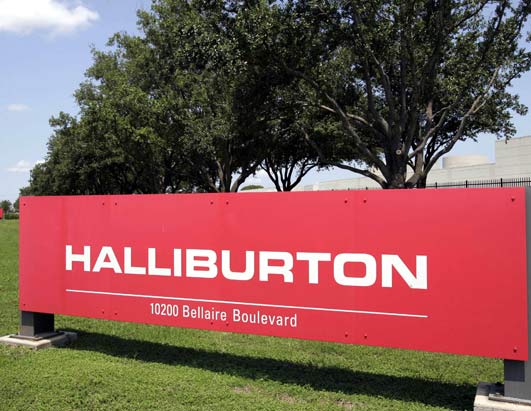 Oct. 29 (Bloomberg) — Halliburton Co. may face increased liability in the Gulf of Mexico oil spill after the staff of a U.S. presidential panel said the contractor knew cement it mixed for BP Plc’s well was unstable.

The staff of the National Commission on the BP Deepwater Horizon Oil Spill said documents provided by Halliburton showed at least three tests of the mixture, in February and April, found the recipe wasn’t stable. Halliburton disputed the findings, saying in a statement the formulas tested differed from the final recipe used in the doomed Macondo well. Halliburton declined for a second day in New York trading.

Halliburton, the world’s second-largest provider of oilfield services, has received less scrutiny from lawmakers and investigators than BP and Transocean Ltd., owner of the rig that blew up on April 20, killing 11 workers and setting off the biggest U.S. oil spill. The report increases Halliburton’s legal risks, said J. David Anderson, an oil-industry analyst with J.P. Morgan Securities LLC in New York.

“Up to now, we didn’t see a significant liability to Halliburton with respect to the blowout, but that may change if the report has a widespread impact,” Anderson said in a note to investors yesterday calling the stock “overweight” based on the new information.