“The collapse of the financial system is still in its early stage.”

“The social unrest will illicit cries for the government to exert unusual force to head off a complete breakdown of law and order. The ultimate trap will be set for a system of government claiming to protect a free society.”

“If more power and police authority are not given to the Federal government, it will be argued that only anarchy will result. If more government policing power is given, it will mean a lethal threat to civil liberties.”

“We are rapidly moving toward a dangerous time in our history. Society as we know it is vulnerable to political and social unrest. This impending crisis comes as a consequence of our flawed foreign and domestic economic policies, a silly notion about money, ignorance about central banking, ignoring the onerous power and mischief of out of control intelligence agencies, our unsustainable welfare state and a willingness to sacrifice privacy and civil liberties in an attempt to achieve safety and security from an inept government.”

“The only way that we can prevent blood from running in the streets is to offer a better idea of the proper role of government in a society that desires, first and foremost, liberty.”

The large-scale government intervention in the economy is going to end badly. 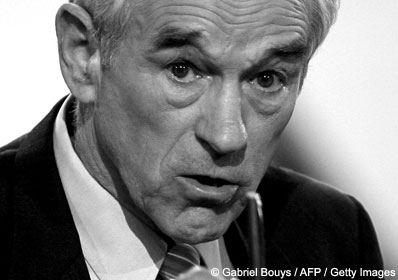 Any number of pundits claim that we have now passed the worst of the recession. Green shoots of recovery are supposedly popping up all around the country, and the economy is expected to resume growing soon at an annual rate of 3% to 4%. Many of these are the same people who insisted that the economy would continue growing last year, even while it was clear that we were already in the beginning stages of a recession.

A false recovery is under way. I am reminded of the outlook in 1930, when the experts were certain that the worst of the Depression was over and that recovery was just around the corner. The economy and stock market seemed to be recovering, and there was optimism that the recession, like many of those before it, would be over in a year or less. Instead, the interventionist policies of Hoover and Roosevelt caused the Depression to worsen, and the Dow Jones industrial average did not recover to 1929 levels until 1954. I fear that our stimulus and bailout programs have already done too much to prevent the economy from recovering in a natural manner and will result in yet another asset bubble.

Anytime the central bank intervenes to pump trillions of dollars into the financial system, a bubble is created that must eventually deflate. We have seen the results of Alan Greenspan’s excessively low interest rates: the housing bubble, the explosion of subprime loans and the subsequent collapse of the bubble, which took down numerous financial institutions. Rather than allow the market to correct itself and clear away the worst excesses of the boom period, the Federal Reserve and the U.S. Treasury colluded to put taxpayers on the hook for trillions of dollars. Those banks and financial institutions that took on the largest risks and performed worst were rewarded with billions in taxpayer dollars, allowing them to survive and compete with their better-managed peers.

Read moreRon Paul: Be Prepared for the Worst