If the old testing method is used, this tea could contain 2,400 Bq/kg of radioactive cesium in dry leaves.

The other sample from Kanuma City in Tochigi Prefecture also exceeded the new safety limit for brewed tea (10 Bq/kg), with 12 Bq/kg of cesium.

Checking the Kanuma City’s website, there is no mention of this test result, even though it was in the news on May 18, 2012 (Shimotsuke Shinbun). Instead, the page for Kanuma’s agricultural products has this interesting mention of how to take care of the tea plantations while the shipment of the tea from the city is halted (it has been halted since June last year, after the fresh leaves of tea from the city tested above the provisional safety limit):

The tea leaves were picked in Fukushima City in May last year, and they were not commercial tea. A city resident grew in his/her garden and picked for his/her own use.

I hope the tea weren’t consumed or given as gifts. At 24,700 becquerels/kg, you cannot even dump it in the garbage, let alone incinerate.

Fukushima: 24,700 becquerels/kg of radioactive cesium from tea leaves, brought by a resident to the testing laboratory

24,700 becquerels/kg of radioactive cesium was detected from the tea leaves brought by a city resident to the testing laboratory operated by Fukushima City. The news was reported at the meeting of the disaster response headquarters of Fukushima City on March 22.

The “cold shutdown/accident is over” declaration by PM Noda on December 16 must have been a signal that unleashed the cold shutdown of intelligence in many parts of Japan. Here’s one from Saitama Prefecture.

Sayama City, known for its “Sayama-cha” brand green tea, has been suffering as high levels of radioactive cesium continue to be detected from its teas. As if to help the city and dispel “baseless rumors” that are scaring the consumers from buying Sayama tea, Saitama Prefecture has just started forcing school children to gargle with powdered Sayama tea as an effort to instill good behavior in preventing cold and flu.

Problem: radioactive cesium has been detected from green tea grown in Sayama, some exceeding the national provisional limit of 500 becquerels/kg by a wide margin. In fact, it is rare to find Sayama tea without any radioactive cesium.

The latest testing done by Saitama Prefecture shows continued detection of radioactive cesium from almost all teas grown in Sayama. 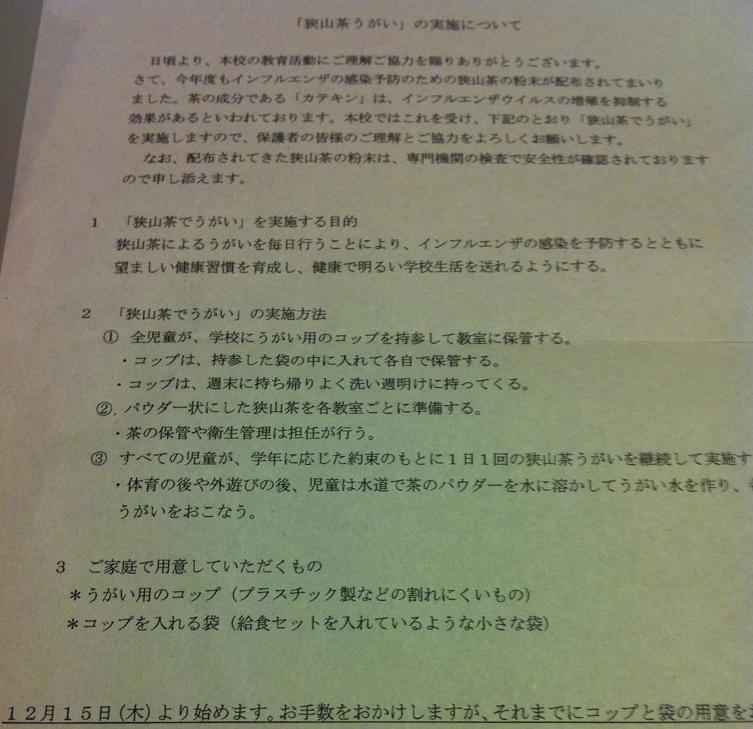 Nonetheless, parents of the children who goes to school in Saitama received the notice like this:

TOKYO (Kyodo) — A total of 471 people have developed a wheat allergy after using a type of popular green face soap and some of them have become seriously ill, health ministry officials said Tuesday, citing a report by the producer.

Yuuka Co. began recalling the soap called “Cha no Shizuku” (Drip of Tea) in May and has said the soap now on the market is safe as it does not contain the agent that caused the allergic symptoms.

According to the official citing an accident report by the company, 66 people among the total were taken to hospital after developing serious conditions including becoming unconscious.

Listen Now Download the show by right-clicking the link.

Later in the program, we hear from Japanese nuclear activist, Aileen Mioko Smith of Green Action Japan, based in Kyoto, on the alarming increase in radiation levels in Japan and government inaction. First, Smith discusses her research into health effects from the 1979 Three Mile Island nuclear disaster. The conversation moves to rising radiation levels in Japan citizens are reporting, the lack of government testing, Japanese protests about the high levels of contamination in Fukushima prefecture, and Smith’s concerns about high radiation exposures in children.

She attributes the symptoms to radiation exposure, and added: “We are encountering new situations we cannot explain with the body of knowledge we have relied upon up until now.”

They are dying (very slowly):

– Hiroshima To Fukushima, Finishing The Job: A Time For The Kill (Veterans Today):

– Independent Scientist Leuren Moret: Japan, US, Canadian Governments Complicit In Covering Up Fukushima Radiation – ‘We Are Facing Total Extermination And Genocide’ – ‘We Are On Our Own’ (Video & Article):

‘The Fukushima Disaster Is Going To Finish The Japanese’

And what is the government doing?

Scientists and doctors are calling for a new national policy in Japan that mandates the testing of food, soil, water, and the air for radioactivity still being emitted from Fukushima’s heavily damaged Daiichi nuclear power plant.

“How much radioactive materials have been released from the plant?” asked Dr Tatsuhiko Kodama, a professor at the Research Centre for Advanced Science and Technology and Director of the University of Tokyo’s Radioisotope Centre, in a July 27 speech to the Committee of Health, Labour and Welfare at Japan’s House of Representatives.

“The government and TEPCO have not reported the total amount of the released radioactivity yet,” said Kodama, who believes things are far worse than even the recent detection of extremely high radiation levels at the plant.