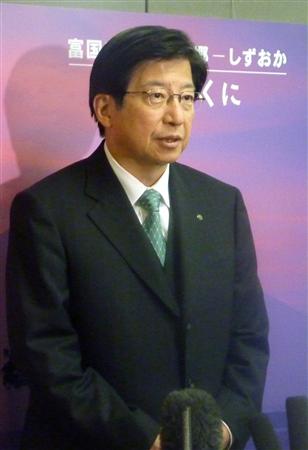 The Oxford PhD (in history) governor of Shizuoka, Heita Kawakatsu (pictured), changed his tunes and now says his prefecture will follow the order by the national government and test the bulk tea (“aracha”) for radioactive materials.

Why? Nobody knows. Shizuoka’s “shincha” (new tea) has already been sold and shipped, both in bulk form and in the final, blended form. “Shincha” commands a huge premium over “nibancha” (second tea).

But the tea growers in Shizuoka are furious at the governor’s flip-flop, as Shizuoka Shinbun reports (6/3/2011; original in Japanese, rough English summary):

Tea growers and wholesalers in Shizuoka expressed anger and confusion over the government’s decision to apply the provisional limit for raw tea leaves [500 becquerels/kg] to “aracha” (bulk tea).

Shizuoka Prefecture had insisted the tea was “safe”. Governor Heita Kawakatsu said on June 2, prior to the national government announcement, that half-hearted measures [like testing the bulk tea for radiation] would only amplify the fear.

Shizuoka JA [agricultural co-op] accepted the decision, but the growers are not convinced. They wonder whether applying the same standard for raw leaves to the bulk tea is appropriate. They also wonder if they can continue to produce tea next year. A tea wholesaler in Shizuoka City is furious, saying “We have already shipped “shincha” (new tea) all over Japan. If they were going to do it, they should have done it much sooner.” He continued, “There will be returns. Will the wholesalers like us be compensated?” The president of Shizuoka Tea Market that trades “aracha” (bulk tea) asks, “What about “aracha” that the wholesalers have as inventory or which is currently in the market?”

Sorry, growers. When the radioactive materials were detected in nearby Kanagawa, you should have erred on the side of caution and stopped processing raw tea leaves, which then turned out to be radioactive. Sorry wholesalers. You should have stopped shipment, no matter how much you wanted to believe the governor and his tea-gulping performance.

Instead, Shizuoka growers, wholesalers, JA, and the prefectural government did a “new tea” festival and shipped its new tea (in bulk tea form and final blend) all over Japan. As I posted, they shipped to the US, too.