This story is being censored by ABC, CBS, NBC, CNN and MSNBC.

Yesterday on Fox, three of the front line fighters for the USA at Benghazi, came forward. They verified that three separate stand down orders were given that prevented a rescue of the Benghazi Consulate.

Those same men say that likely all four Americans that died that day, would not of died if not for those stand down orders. A stand down order means to do nothing.  In this case it means to abandon Ambassador Stevens and his guards, even though they were less than a mile away, and could have been saved.   This is proof of another major lie by Obama, he has claimed for two years that no stand down order was given.

The USA fighters were private guards hired by the CIA to protect their officers at Benghazi.  The stand down orders were a de facto death sentences for the Americans at the consulate.  The American guards eventually decided to disobey orders and do a rescue, by themselves.  It worked and they saved some, but due to the three stand down orders,  Ambassador Stevens was gone by the time they got there. 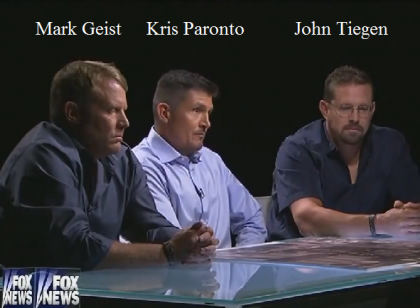 Friday Bret Baier and Fox News put out a news special on this that goes into great detail.  We highly recommend viewing the whole special.  AUN-TV has pulled some highlights from that special in the following video so that this article can better be understood.

Read moreInsiders Come Forward, Proof Of Benghazi Stand Down Order, It Was Obama

By now most have probably heard about the 400 surface-to-air missiles that were stolen in Benghazi. An attorney for the witnesses/whistleblowers came out in an interview with WMAL yesterday to drop this bombshell.

“I do not know whether [the missiles] were at the annex, but it is clear the annex was somehow involved in the process of the distribution of those missiles,” said DiGenova in an interview Monday with WMAL’s Mornings On The Mall.

How did DiGenova get this information? He told WMAL that ever since he and his wife and law partner, Victoria Toensing, began representing the Benghazi whistleblowers last spring, they have been contacted by several people eager to share information about what really happened the night of September 11, 2012, when four Americans were killed in the Consulate attack, including U.S. Ambassador to Libya Christopher Stevens.

“What difference does it make?”

Jason Mattera caught up with Hillary Clinton at one of the DC stops on her book tour this week, and asked the former Secretary of State if she would mind signing a copy of Hard Choices… but with a twist. “If you could make it out to Christopher Stevens,” Mattera queried. “I think you knew him.”

Christopher Stevens, of course, was the U.S. ambassador to Libya who was murdered along with three other Americans on Clinton’s watch, when Jihadists attacked two U.S. outposts in Benghazi on September 11, 2012.

Hillary, surprised by the request, replied, “Yeah, I’m not gonna make it out to Chris Stevens.”  Mattera followed-up with, “What difference does it make?” a reference to Clinton’s infamous 2013 Senate testimony before the Foreign Relations Committee.

With Hillary Clinton still plagued by relentless confrontations about her role in the Benghazi fiasco, which apparently are “making a difference”, and certainly distracting from Obama’s otherwise impeccable domestic (and foreign) reign, it was about time the US finally exposed a much more “appropriate” scapegoat for the public anger surrounding the events in Libya on September 11, 2011. Which is precisely what it did earlier today, when it was revealed not only who it believes the “mastermind” of the Benghazi attack is, but that the person in question, Ahmed Khatallah, had been captured.

– Pulitzer-Prize Winning Reporter Sy Hersh: Benghazi Is a HUGE Scandal … But Not For the Reason You Think (Washington’s Blog, April 15, 2014):

Beyond Partisan Politics: What Benghazi Is Really About

In January, the Senate Intelligence Committee released a report on the assault by a local militia in September 2012 on the American consulate and a nearby undercover CIA facility in Benghazi, which resulted in the death of the US ambassador, Christopher Stevens, and three others. The report’s criticism of the State Department for not providing adequate security at the consulate, and of the intelligence community for not alerting the US military to the presence of a CIA outpost in the area, received front-page coverage and revived animosities in Washington, with Republicans accusing Obama and Hillary Clinton of a cover-up.

That’s the part you’ve heard about: failure to protect the personnel at the embassy.

But then Hersh breaks the deeper story wide open:

Read morePulitzer-Prize Winning Reporter Seymour Hersh: Benghazi Is A HUGE Scandal … But Not For The Reason You Think

… but stand down orders were given. 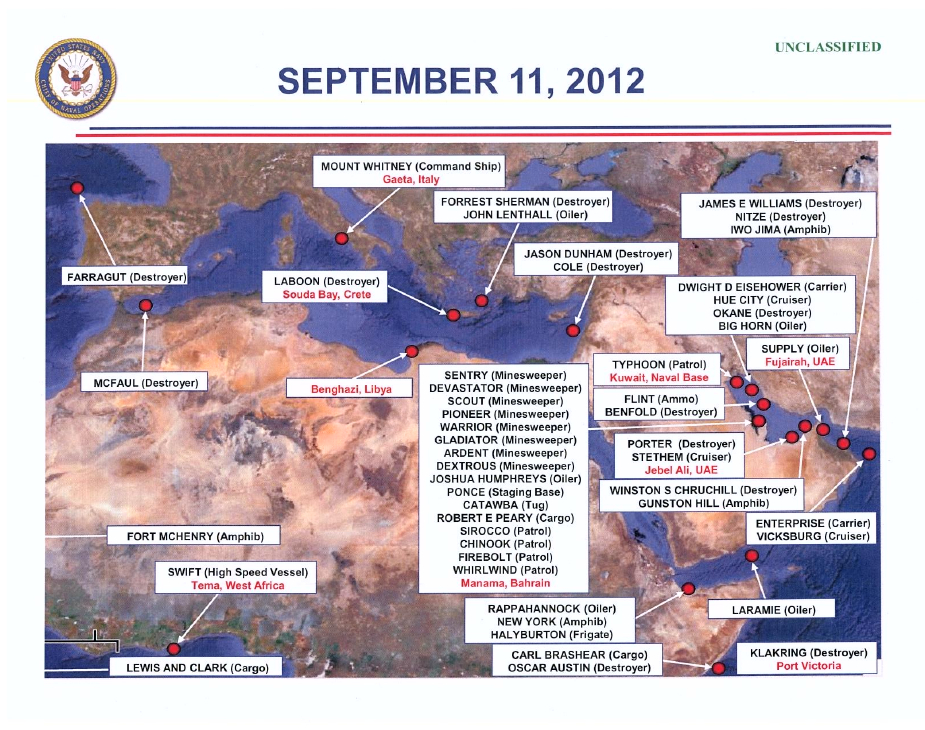 The U.S. military had a multitude of forces in the region surrounding Libya when terrorists attacked the Special Mission in Benghazi and murdered four Americans, according to an unclassified Navy map obtained by Judicial Watch this week.

The map features the Navy fleet positions in the North Africa Area of Responsibility (AOR) on September 11, 2012, the day Islamic jihadists raided the U.S. Special Mission in Benghazi. Ambassador Christopher Stevens, the first diplomat to be killed overseas in decades, and three other Americans were murdered in the violent ambush.

Dozens of vessels were stationed in the region on that day, including two aircraft carriers (Dwight D. Eisenhower and Enterprise), four amphibious ships, 13 destroyers, three cruisers and more than a dozen other smaller Navy boats as well as a command ship. Carriers are warships, the powerhouse of the naval fleet with a full-length flight deck for aircraft operations. During the Benghazi attack, two carriers were based to the east in the Arabian Sea, the Navy map shows.

Two amphibious assault ships (Iwo Jima and Gunston Hill) were situated to the east in the Gulf of Oman and one (New York) was in the Gulf of Aden, the map shows. A fourth (Fort McHenry) was located on the west side of the African continent in the Atlantic Ocean. Amphibious ships resemble small aircraft carriers and have air-craft strips for vertical and short take-offs and landings. The destroyers are scattered throughout the region, but the closest appear to be four (Cole, Forrest Sherman, Jason Dunham and Aboon) in the Mediterranean Sea north of Libya. The rest of the fleet includes cruisers, minesweepers, patrols and a command ship.

A rare bipartisan report by the Senate Select Committee on Intelligence released Wednesday attempted to put to rest conspiracy theories and politically-driven allegations about the Sept. 11, 2012, Benghazi attacks that killed four American officials.

The panel’s 85-page report placed blame for the incident first and foremost on armed Islamist militants — mostly associated with five groups closely tied to core-al Qaeda — but also with the State Department run by former Secretary of State Hillary Clinton, whose staff failed to heed incessant warnings that security was evaporating there.

The committee’s majority Democrats, led by Chairman Dianne Feinstein of California, concluded that the attacks “were likely preventable.”

The deputy of slain U.S. Ambassador Christopher Stevens has told congressional investigators that a team of Special Forces prepared to fly from Tripoli to Benghazi during the Sept. 11, 2012 attacks was forbidden from doing so by U.S. Special Operations Command Africa.

The account from Gregory Hicks is in stark contrast to assertions from the Obama administration, which insisted that nobody was ever told to stand down and that all available resources were utilized. Hicks gave private testimony to congressional investigators last month in advance of his upcoming appearance at a congressional hearing Wednesday.

According to excerpts released Monday, Hicks told investigators that SOCAFRICA commander Lt. Col. Gibson and his team were on their way to board a C-130 from Tripoli for Benghazi prior to an attack on a second U.S. compound “when [Col. Gibson] got a phone call from SOCAFRICA which said, ‘you can’t go now, you don’t have the authority to go now.’ And so they missed the flight … They were told not to board the flight, so they missed it.”

No assistance arrived from the U.S. military outside of Libya during the hours that Americans were under attack or trapped inside compounds by hostile forces armed with rocket-propelled grenades, mortars and AK-47 rifles.

The Petraeus Affair has demonstrated yet again how a sex scandal story can be fed into the U.S. media to serve both as a trigger for “political assassination” and as “the tree hiding the forest.” Even though what lies behind the salacious smoke screen is still the object of speculation, most of those speculations are more credible than a simple extramarital affair.

One of the possible explanations of Petraeus’ departure is his stance on Israel which he saw as a liability to US interests in the Middle East:

“The enduring hostilities between Israel and some of its neighbors present distinct challenges to our ability to advance our interests in the AOR [Area of Operations]. Israeli-Palestinian tensions often flare into violence and large-scale armed confrontations. The conflict foments anti-American sentiment, due to a perception of U.S. favoritism for Israel. Arab anger over the Palestinian question limits the strength and depth of U.S. partnerships with governments and peoples in the AOR and weakens the legitimacy of moderate regimes in the Arab world. Meanwhile, al-Qaeda and other militant groups exploit that anger to mobilize support. The conflict also gives Iran influence in the Arab world through its clients, Lebanese Hizballah and Hamas.” (Ali Abunimah, When Former CIA Chief David Petraeus Enraged the Israel Lobby, Electronic Intifada, November 12, 2012.)