Well, there is a lot more to know about edible plants, so do your research, because during the coming (planned) total collapse you need to know as much as you can about this subject…

– 7 Reasons to Take an Air Rifle for Survival Weapon:

“In most civilised countries, the connived massacre events have resulted in serious gun control.
Even now, air rifles & pistols have to be logged by the vendor, even though firearms certificates aren’t necessary, which they are for all other guns.

So, the only options left for small game is either bows, slings or airguns.”

Looks like the German government does not want more people to become aware that something isn’t right in this world and to prepare for what is definitely coming.

The German government might storm your home under any made up pretext now.

It is very wise to prepare for what is coming.

“By failing to prepare, you are preparing to fail.”

“October 17–18, 1977: Lufthansa Flight 181 was hijacked by four Palestinian terrorists demanding the release of Red Army Faction (RAF) members. GSG 9 officers stormed the aircraft on the ground in Mogadishu, Somalia, and freed all 86 hostages, killing three terrorists and capturing the remaining one.” 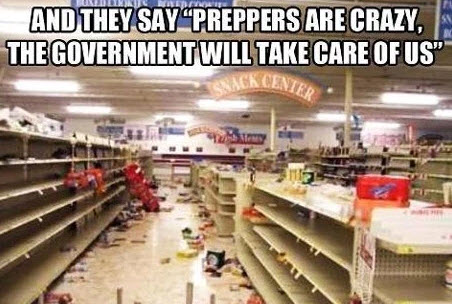 Can you picture empty store shelves?

A couple of weeks ago, in early January, there was a relatively minor storm in the South and Southeast U.S. Cold weather, threat of the power going out, snow and ice and empty store shelves.

This wasn’t the big one. And yet it was enough to bring things to a panic.

If this is how people react to an extreme cold spell, then what happens when something major hits?