What is happening now? “We are spending ourselves into oblivion.”

Sharp losses in New York, London, Europe and the Far East raised the spectre that governments may be forced to impose emergency holidays to avert a meltdown across world stock markets.

Before Wall Street opened yesterday, American regulators suspended all trading of Dow Jones futures contracts, which had plunged. Such contracts allow traders to bet on the future direction of the Dow Jones index. The plunge had triggered an automatic circuit breaker, which halts trading to prevent a market sliding into freefall.

Nouriel Roubini, Professor of Economics at New York University, said that his prediction earlier this week that markets would have to be shut down is already coming true.

He said: “This morning, even before the markets in the US opened, the S&P futures fell by more than their daily limit. What I said yesterday has already started.”

A forced closure of stock markets in America would respresent the first time that Washington would have shut Wall Street since the terrorist attacks of September 2001. It would also have echoes of the 1930s, when President Franklin D. Roosevelt shut American banks during an enforced holiday.

“We’ve reached a situation of sheer panic,” Roubini, who predicted the financial crisis in 2006, told a conference of hedge-fund managers in London today. “There will be massive dumping of assets” and “hundreds of hedge funds are going to go bust,” he said.

Group of Seven policy makers have stopped short of market suspensions to stem the crisis after the U.S. pledged on Oct. 14 to invest about $125 billion in nine banks and the Federal Reserve led a global coordinated move to cut interest rates on Oct. 8. Emmanuel Roman, co-chief executive officer at GLG Partners Inc., said today that as many as 30 percent of hedge funds will close.

“Systemic risk has become bigger and bigger,” Roubini said at the Hedge 2008 conference. “We’re seeing the beginning of a run on a big chunk of the hedge funds,” and “don’t be surprised if policy makers need to close down markets for a week or two in coming days,” he said.

Roubini predicted in July 2006 that the U.S. would enter an economic recession. In February this year, he forecast a “catastrophic” financial meltdown that central bankers would fail to prevent, leading to the bankruptcy of large banks exposed to mortgages and a “sharp drop” in equities. 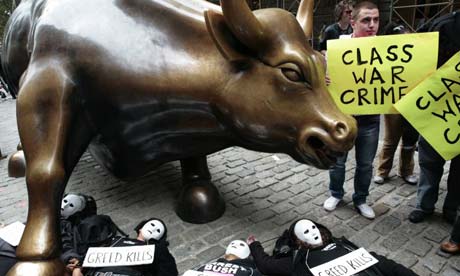 Financial workers at Wall Street’s top banks are to receive pay deals worth more than $70bn (£40bn), a substantial proportion of which is expected to be paid in discretionary bonuses, for their work so far this year – despite plunging the global financial system into its worst crisis since the 1929 stock market crash, the Guardian has learned.

Staff at six banks including Goldman Sachs and Citigroup are in line to pick up the payouts despite being the beneficiaries of a $700bn bail-out from the US government that has already prompted criticism. The government’s cash has been poured in on the condition that excessive executive pay would be curbed.

Pay plans for bankers have been disclosed in recent corporate statements. Pressure on the US firms to review preparations for annual bonuses increased yesterday when Germany’s Deutsche Bank said many of its leading traders would join Josef Ackermann, its chief executive, in waiving millions of euros in annual payouts.

The sums that continue to be spent by Wall Street firms on payroll, payoffs and, most controversially, bonuses appear to bear no relation to the losses incurred by investors in the banks. Shares in Citigroup and Goldman Sachs have declined by more than 45% since the start of the year. Merrill Lynch and Morgan Stanley have fallen by more than 60%. JP MorganChase fell 6.4% and Lehman Brothers has collapsed.

At one point last week the Morgan Stanley $10.7bn pay pot for the year to date was greater than the entire stock market value of the business. In effect, staff, on receiving their remuneration, could club together and buy the bank.

Sept. 19 (Bloomberg) — The Comex division of the New York Mercantile Exchange raised margin payments on gold and silver futures by as much as 47 percent after price swings accelerated.

The rates represent the cash traders must put aside when buying and selling the commodities. Gold surged the most in nine years on Sept. 17 while silver rose the most since 1979.

Sept. 4 (Bloomberg) — Companies in the U.S. cut an estimated 33,000 jobs in August, a private report based on payroll data showed today.

The decrease followed a revised gain of 1,000 for the prior month that was lower than previously estimated, ADP Employer Services said.