Seventy-two City bankers are suing Dresdner Kleinwort and Commerzbank for €33m ($47.8m) worth of unpaid bonuses in the biggest case of its kind in the UK.

The lawsuit, filed on Tuesday in the High Court, is the latest sign that bankers are ready to fight for their pay packets in spite of public outrage over the size of the rewards on offer in an industry widely blamed for the financial crisis.

An additional 25-30 former employees at Dresdner, which was bought by Germany’s Commerzbank late last year, are expected to file a separate suit in the coming weeks.

As many as 250 Dresdner Kleinwort bankers are preparing legal action to recover tens of millions of pounds after the German bank’s new owner reneged on bonus payments.

Several of the bankers, who worked for Dresdner Kleinwort in the City of London until it was sold to Commerzbank in September, are claiming bonuses in excess of £1 million with the disputed payments totalling around £50 million.

The taxpayer looting and unsustainable debt creating ‘Paulson-Bernanke-Brown’ virus spreads rapidly around the world. Even financially relatively sound countries are now affected. ‘Sound economics’ resistance is now at close to 100%.

Angela Merkel will make her sharpest political U-turn since becoming German Chancellor this week when her government unveils a €50bn (£44bn) package of tax cuts and incentives to protect Europe’s biggest economy from deepening recession.

The “Pact for Germany” programme contains a battery of tax cuts, health insurance reductions and special government funds designed to stimulate an economy forecast to contract by 3 per cent this year.

The measures, expected to be agreed at a crisis cabinet meeting tomorrow, will be announced only weeks after Mrs Merkel’s grand coalition government heaped scorn on Britain for “tossing around billions” in its efforts to tackle the credit crunch.

Germany’s Finance Minister, Peer Steinbrück, went so far as to condemn Gordon Brown’s VAT cuts as “crass Keynesianism” and said that it would take Britain a “whole generation” to work off the debt. Mrs Merkel insisted that spending one’s way out of recession did not work. (Absolutely correct!)

Yesterday, however, Mr Steinbrück announced plans to slash the basic tax rate from 15 to 12 per cent to persuade poorer families to keep spending. 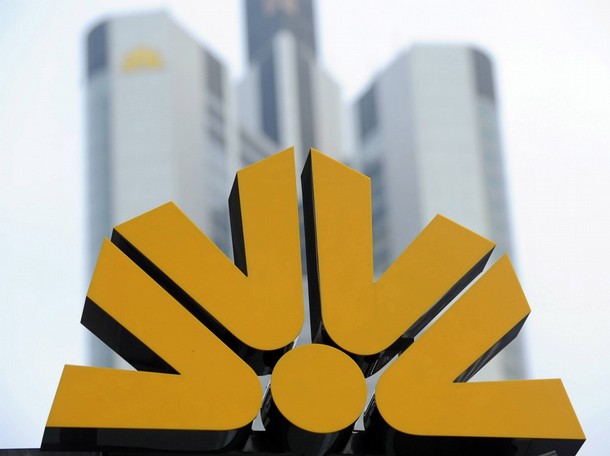 FRANKFURT, Jan 8 (Reuters) – Germany is taking a stake of 25 percent plus one share in Commerzbank (CBKG.DE) in return for an additional 10 billion euro ($13.6 billion) capital injection, the country’s second-biggest listed bank said on Thursday.

It is the first time Berlin has partially nationalised a major bank in response to the global financial crisis and follows similar moves by London and Washington. Commerzbank will get a total of 18.2 billion euros in state capital plus 15 billion in guarantees.

“We are weatherproofing our bank for an economically stormy environment,” Chief Executive Martin Blessing said in a statement.

Nov. 8 (Bloomberg) — Allianz SE, Europe’s second-biggest insurer by market-value, posted a 2 billion-euro ($2.6 billion) loss and said it may miss operating profit forecasts for this year and next because of the turmoil in financial markets.

Allianz had a net loss including discontinued operations in the third quarter, compared with net income of 1.9 billion euros a year earlier, the Munich-based insurer said in a statement today. That was less than the 3.85 billion-euro estimate of 14 analysts surveyed by Bloomberg. Net income from continuing operations, which reflects the sale of Dresdner, was 545 million euros, the company said, missing analysts’ estimates of 782 million euros.

“Without a major equity market recovery, the operating profit outlook of 9 billion euros before banking for this year and next year cannot be reached,” Allianz Chief Financial Officer Helmut Perlet said in the statement.

Allianz, led by Chief Executive Officer Michael Diekmann, agreed on Aug. 31 to sell Dresdner Bank to Frankfurt-based Commerzbank AG for cash and stock. Commerzbank shares lost about 40 percent of their value in the month ended Sept. 30. Discontinued operations, which reflect the sale of Dresdner effective from Sept. 1, accounted for “transaction-based impairments according to IFRS 5” of 1.4 billion euros as well as for a net loss of 1.2 billion euros from Dresdner’s operations, Allianz said.