We are the last generation with a voice and free will to change the course of history. Everyone connected everywhere – smart phones are to be the tools of the Smart World Order; bringing an end to physical cash, keys, drivers’ licences, etc. They are also intended to be used daily to validate identity in the new ‘trusted’ Internet community.

The phone, or the chip that links the user’s ID to the phone, then becomes too valuable to lose, and the only safe place is under the skin. Unless we refuse to comply….

Author and professor of biblical prophecy, Paul McGuire, talked about microchip implants and the ‘Mark of the Beast.’ He believes there is a long term plan afoot to microchip the US population, and what he finds especially alarming is that people could be microchipped without their awareness, such as through a nasal mist or vaccination. “With nanotechnology, you now have microscopic particles that are essentially biochip implants, which send out an RFID signal,” but they’re so tiny, they could be absorbed in a variety of ways, he explained.McGuire is convinced that there’s a secretive elite who perceives the populace as their property, and seeks to implant the chips for “branding us, controlling us, and owning us.”

Paul McGuire is the author of 22 books, a television commentator on the Fox News Network and CNN, a former syndicated radio talk show host, professor of Eschatology or Bible Prophecy at the King’s College. McGuire has produced two science fiction feature films in Hollywood. The History Channel has done two specials with Paul, on Seven Signs of the Apocalypse and Revelation. He is an internationally recognized expert on globalism, Bible prophecy and current events. McGuire has interviewed military generals, Presidents and Prime Ministers from around the world. The former Prime Minister of Israel Ehud Olmert met with McGuire after reading his book, Are You Ready?, which talks about the prophet Ezekiel’s prediction of an invasion of Israel by nations like Russia and Iran.

DELRAY BEACH, Fla., Oct 11, 2011 (GlobeNewswire via COMTEX) — PositiveID Corporation (“PositiveID” or “Company”) PSID 0.00% , a developer of medical technologies for diabetes management, clinical diagnostics and bio-threat detection, announced today that it has received an order for its VeriChip(TM) microchip to be used for disaster preparedness and emergency management in Israel by an integration partner.

The VeriChip radio frequency identification (RFID) microchip was cleared by the U.S. Food and Drug Administration in 2004 for patient identification. The VeriChip can also be used to assist in the management of emergency situations and disaster recovery in conjunction with a customized camera capable of receiving both RFID scanned data and GPS data wirelessly, and a Web-enabled database for gathering and storing information and images captured during emergency response operations.

The Company’s integration partner intends to provide the microchips to the Israel Defense Forces (IDF), the State of Israel’s military force.

VeriChip (CHIP), the company that markets a microchip implant that links to your online health records, has acquired Steel Vault (SVUL), a credit monitoring and anti-identity theft company. The combined company will operate under a new name: PositiveID. 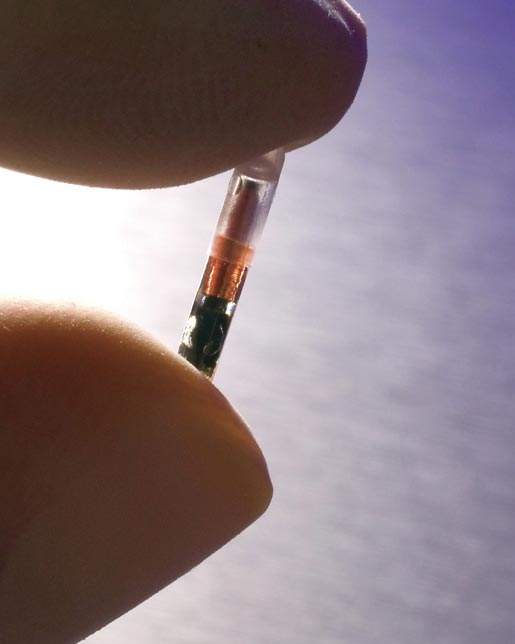 The all-stock transaction will leave PositiveID in charge of a burgeoning empire of identity, health and microchip implant businesses that will only encourage its critics. BNET previously noted that some regard the company as part of a prophecy in the Book of Revelation (because the HealthLink chip carries an RFID number that can be used as both money and proof of ID) or as part of President Obama’s secret Nazi plan to enslave America.

The most obvious criticism to be made of the deal is that it potentially allows PositiveID to link or cross-check patient health records (from the HealthLink chip) to people’s credit scores. One assumes that the company will put up firewalls to prevent that. PositiveID CEO Scott Silverman said:

“PositiveID will be the first company of its kind to combine a successful identity security business with one of the world’s first personal health records through our Health Link business. PositiveID will address some of the most important issues affecting our society today with our identification tools and technologies for consumers and businesses.”

VeriChip‘s TV ad for its Health Link implantable microchip that connects to your online medical records has spawned a backlash on YouTube. Observers regard it as either part of President Obama‘s secret Nazi plan to enslave us all or a sign of the coming antichrist.

The ad itself comes on like all drug advertising does – healthy, smiling middle-aged people describing the things about life they are thankful for.

But, to give VeriChip’s critics some credit, the ad clearly positions the VeriChip as something for everyone, not merely patients who are so deranged or damaged that having a chip to transmit accurate data might be useful.

To think something so slim can connect you.

… Health Link is always with you when every second counts in the emergency room.

… Because Bob has trouble remembering all his medications.

So far so good. But then the ad suggests a much wider application. A young woman says:

… because my car lost control while driving.

And a groovy looking guy in a pork-pie hat adds:

… because I have diabetes but it doesn’t have me.

When you add this to VeriChip’s previous marketing activity – in which they implanted the chips in cuties on Miami’s nightclub scene so they didn’t have to bother showing ID or carrying cash – the impression it gives is that VeriChip does indeed want everyone to be implanted.

1. Inform everybody you know about the microchip and built the largest connection of people possible. Connect to other groups that oppose the chip.

2. Inform yourself about your rights and your protection given to you by the constitution.
(NSPD 51 and the Patriot Act are unconstitutional.)

3. Civil disobedience. Do not be immunized. Do not allow any chip implant. Resist if you have to.

4. Protect yourself “against all enemies foreign and domestic” if necessary.

More on microchips:
– Greg Evenson on Microchips and Swine Flu
– Whistleblower: Forced vaccinations – clear warning
– CASPIAN RELEASES MICROCHIP CANCER REPORT:
A new paper titled “Microchip-Induced Tumors in Laboratory Rodents and Dogs: A Review of the Literature 1990–2006” has been released…
– Met Police officers to be ‘microchipped’ by top brass in Big Brother style tracking scheme
Every single Metropolitan police officer will be ‘microchipped’….
…there will not be any choice about wearing one.
– UK: Compulsory microchipping of dogs
– U.S. School District to Begin Microchipping Students
So far the RFID chips are only implanted in the schoolbag to monitor the students movements.
– The Microchip is here !!! – New World Order
– The Microchip: Health, Privacy, Civil Rights And Freedom Under Siege
U.K. to Begin Microchipping Prisoners 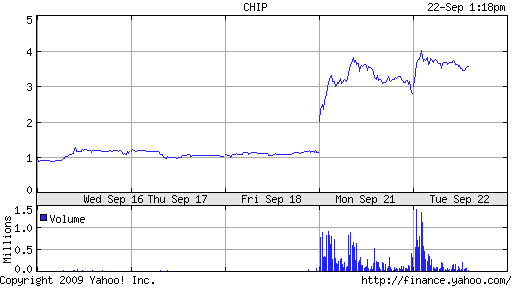 DELRAY BEACH, Fla. & CHASKA, Minn.–(BUSINESS WIRE)–VeriChip Corporation (“VeriChip”) (NASDAQ: CHIP – News) and its development partner RECEPTORS LLC, a technology company whose AFFINITY by DESIGNTM chemistry platform can be applied to the development of selective binding products, announced today that VeriChip has been granted an exclusive license to RECEPTORS’ Patent No. 7,504,364 titled “Methods of Making Arrays and Artificial Receptors” and Patent No. 7,469,076 “Sensors Employing Combinatorial Artificial Receptors,” in their application to the development of the virus triage detection system for the H1N1 virus. The patents can also be applied to detection systems for other viruses and biological threats such as Methicillin-resistant Staphylococcus aureus (MRSA).

Last week, VeriChip announced its plans to fund its existing partnership with RECEPTORS to develop the virus triage detection system for the H1N1 virus. The companies have published a white paper entitled, “An Integrated Sensor System for the Detection of Bio-Threats from Pandemics to Emerging Diseases to Bioterrorism,” which outlines the system’s development and is available at www.verichipcorp.com.

Scott R. Silverman, Chairman and CEO of VeriChip, said, “In a short period of time following our announcement earlier this month that VeriChip has agreed to acquire Steel Vault Corporation (OTCBB: SVUL – News) and form PositiveID Corporation, we have been intently focused on maximizing our product portfolio and relationships in order to bring identification technologies and tools for consumers and businesses to market. Our strong balance sheet immediately positions us to invest in our partnership with RECEPTORS and we believe that receiving the exclusive license as it relates to this application of the ‘364 and ‘076 patents, which are the foundation of the virus triage detection system being developed with RECEPTORS, is a key step in the evolution of PositiveID.”

RECEPTORS LLC is a private company based in Chaska, Minnesota. RECEPTORS’ mission is to advance the diagnosis and treatment of disease and to enhance the health, safety, and quality of the global environment through the development and application of artificial receptor products for both research and industry. To achieve this mission, RECEPTORS focuses its individual and collective efforts, its commitment to excellence, and the power of its technology to develop innovative solutions that meet the unique needs of its customers and stakeholders. For further information please visit http://www.receptorsllc.com.

VeriChip Corporation, headquartered in Delray Beach, Florida, has developed the VeriMedTM Health Link System for rapidly and accurately identifying people who arrive in an emergency room and are unable to communicate. This system uses the first human-implantable passive RFID microchip and corresponding personal health record, cleared for medical use in October 2004 by the United States Food and Drug Administration.

On September 8, 2009, VeriChip announced it agreed to acquire Steel Vault Corporation to form PositiveID Corporation. PositiveID will provide identification technologies and tools to protect consumers and businesses. The companies expect the merger to close in the fourth quarter of 2009. 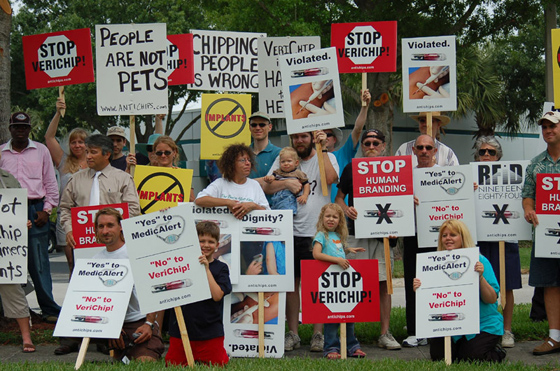