“It is the absolute right of the state to supervise the formation of public opinion.”“We shall go down in history as the greatest statesmen of all time, or as the greatest criminals”

Only under the Obama Presidency, in which every appointment, minor or major, is handed only to the most corrupt, devious crony to be found, can a man like Cass Sunstein be appointed to serve on the NSA oversight panel.  Cass is a noted propagandist, who has advocated that government agents should infiltrate groups and discussions that push “conspiracy theories” (read my article on how to know if you are a conspiracy theorist) in order to delegitimize them. But don’t take my word for it. 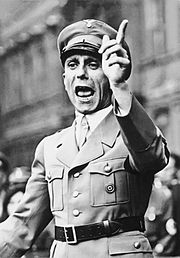 Every credit has its debit, every positive its negative. So for every secret there must be a lie, and every lie must be kept secret.

This is the currency of power today. Fiat truth.

We are not allowed to have any secrets any more.  And yet those who insist they must know the truth about us, who spy upon us to extract our secrets, tell us. in return, only lies.

It is a dangerous, corroding imbalance of power, because lies, like debts, compound.

We all know the famous Goebbels quote,

“If you tell a lie big enough and keep repeating it, people will eventually come to believe it.

From Sadam’s weapons of mass destruction and missiles that could hit us in just 40 minutes of sexed up bullshit, to the stress tests that show us every bank is perfectly solvent and however many billions they launder they are never guilty and no one goes to goal because they are too big to fail and too connected to even question.

The eye of providence looks out and approves of what is done – Annuit cœptis.

According to nucear scientist Leuren Moret Japan is a demonstration by the power elite:

An article appeared in the local (Ishikawa Prefecture) version of Mainichi Shinbun on July 25. The article was about the anti-nuke demonstration in Kanazawa City in Ishikawa on July 24, and it contained this passage:

Among the participants was Mr. Takumi Aizawa, a school worker at Kusano Elementary School in Iitate-mura in Fukushima Prefecture, which has been designated as “planned evacuation zone” by the national government. Mr. Aizawa told the demonstrators, “After the earthquake there was no information. Then a university professor sent by the government came to the village and said, “You can eat vegetables harvested in the village if you wash them”. Children, who had been evacuated, then started to come back [on that reassuring word] and they got irradiated.”

What? And who was this professor? I suspected Dr. “100 millisieverts” Yamashita, but it turned out to be his younger sidekick, Dr. Noboru Takamura of Nagasaki University. The powerful duo was all over Fukushima Prefecture in March and early April, preaching “safety” of radiation and radioactive fallout to the worried residents of Fukushima as the official radiation advisors for the prefecture.

Dr. Takamura went to Iitate-mura on March 25, and told the concerned villagers these soothing words (from Iitate-mura flyer on March 30, in Japanese):

Thyroid cancer from radioactive iodine only affects children and young mothers. People over 40 do not need to worry. Wear a mask outside, and wash your hands when you come home, and you’ll be OK. There will be no ill effect on health living in the village as long as you observe basic hygiene.

Then, he went back to Iitate-mura on April 6, and apparently told the villagers this (from a tweet by @rainbow3342):

Nagasaki University Graduate School Professor Noboru Takamura said during the April 6 meeting in Iitate-mura to explain the risk of radiation, “Rain and typhoon will quickly wash away the radioactive materials. If the radiation is below 10 microsieverts/hour, it’s safe even for children.”

So what else this good doctor and his boss Dr. Yamashita were saying back in March? The collection of tweets were found on this Japanese blog, and they paint a propaganda effort by the Japanese government that would make Goebbels and Edward Bernays proud.

Right after the disaster, the professor who was probably asked by the Fukushima prefectural government said in the lecture in Fukushima City, “it’s safe up to 100 millisieverts”. People in Fukushima were relieved. No one doubted the professor. The recording of the lecture was played everywhere endlessly – radio, inside the buildings, on the street. There must be many in the countryside who still believe him. They don’t have enough information.