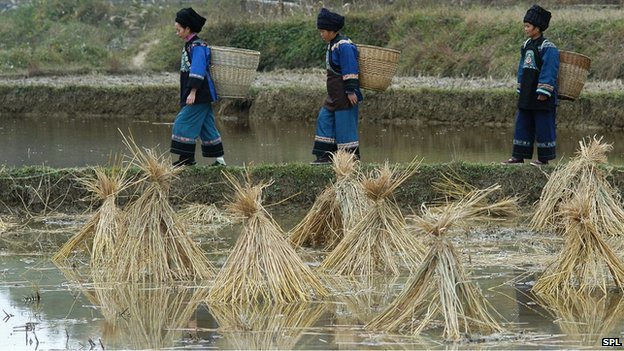 Analysis of commercially available rice imported into the US has revealed it contains levels of lead far higher than regulations suggest are safe.

Some samples exceeded the “provisional total tolerable intake” (PTTI) set by the US Food and Drug Administration (FDA) by a factor of 120.

The report at the American Chemical Society Meeting adds to the already well-known issue of arsenic in rice.

The FDA told the BBC it would review the research.

Lead is known to be harmful to many organs and the central nervous system.

It is a particular risk for young children, who suffer significant developmental problems if exposed to elevated lead levels.

Because rice is grown in heavily irrigated conditions, it is more susceptible than other staple crops to environmental pollutants in irrigation water.

Recent studies have highlighted the presence of arsenic in rice – prompting consumption advice from the UK’s Food Standards Agency and more recently from the FDA.

However, other heavy metals represent a risk as well.

Dr Tsanangurayi Tongesayi of Monmouth University in New Jersey, US, and his team have tested a number of imported brands of rice bought from local shops.

The US imports about 7% of its rice, and the team sampled packaged rice from Bhutan, Italy, China, Taiwan, India, Israel, the Czech Republic and Thailand – which accounts for 65% of US imports.

The team measured the lead levels in each country-category and calculated the lead intake on the basis of daily consumption. The results will be published in the Journal of Environmental Science and Health (Part B).

“When we compared them, we realised that the daily exposure levels are much higher than those PTTIs,” said Dr Tongesayi.

“According to the FDA, they have to be more than 10 times the PTTI levels (to cause a health concern), and our values were two to 12 times higher than those 10 times,” he told BBC News.

‘Globalised market'”So we can only conclude that they can potentially cause harmful effects.”

That factor of 120 (12 times higher than 10 times the PTTI) alluded to by Dr Tongesayi is for Asian children, who are most susceptible by virtue of age and comparatively high rice intake on average.

For non-Asian adults the excesses above the PTTI ranged from 20 to 40.

Rice from China and Taiwan had the highest lead levels, but Dr Tongesayi stressed that all of the samples significantly exceeded the PTTIs.

Dr Tongesayi has also worked on quantifying arsenic contamination – and is in effect working his way through the heavy metals one by one to determine their prevalence.

The problem, he said, is the range of agricultural practices around the world.

“If you look through the scientific literature, especially on India and China, they irrigate their crops with raw sewage effluent and untreated industrial effluent,” he explained.

“Research has been done in those countries, and concerns have been raised because of those practices, but it’s still ongoing.”

Dr Tongesayi also said that the increasing practice of sending electronic waste to developing countries – and the pollution it leads to – exacerbates the problem.

“Maybe we need international regulations that will govern production and distribution of food.”

So far, such international oversight exists informally in the form of the Codex Alimentarius, a collection of food-safety standards first set out by the United Nations.